Library and complex mixed programme for the University of Rostock

As a rule campus extensions at universities become a patchwork of individual buildings connected by external corridors and open paths. We believe that the clarity and monumentality of the campus should be maintained. Important aspects of the architectural design were the density of Rostock and the depth of the construction field. The framework of the design was the complex program.

Another important part of the design is a new access to the campus at the end of the Arno-Holz-Straße. Many people come from this direction with the S-Bahn Rostock Warnemünde and the Rostock tram AG.

Finally, we believe in the importance of having a well-organized library as a key tool for academic life. In addition, we see in the interior of the library a symbolic and experiential power that can be communicated to the entire academic community.

The organizing principle: A pedestal that connects the entire campus and a new entrance on two levels.

Our proposal creates a new, open, elevated space accessible via a large staircase with a lawn on both sides. The increased space (17.80) creates an effortless connection to the elevated campus (16:30). It creates an attractive location, with space for many activities. Our proposal creates an urban dialogue by combining the historic monumentality of House 6 with a new large library building. We also create a third part of the composition through a pedestal and a stepped building. Both are made of colored concrete and create a new, contemporary urban façade. This place is to serve the visitor, similar to the Paradeplatz, as a relaxation and meeting area. In its use, the place should be open. It includes a garden, a sunbathing area and a number of seats. 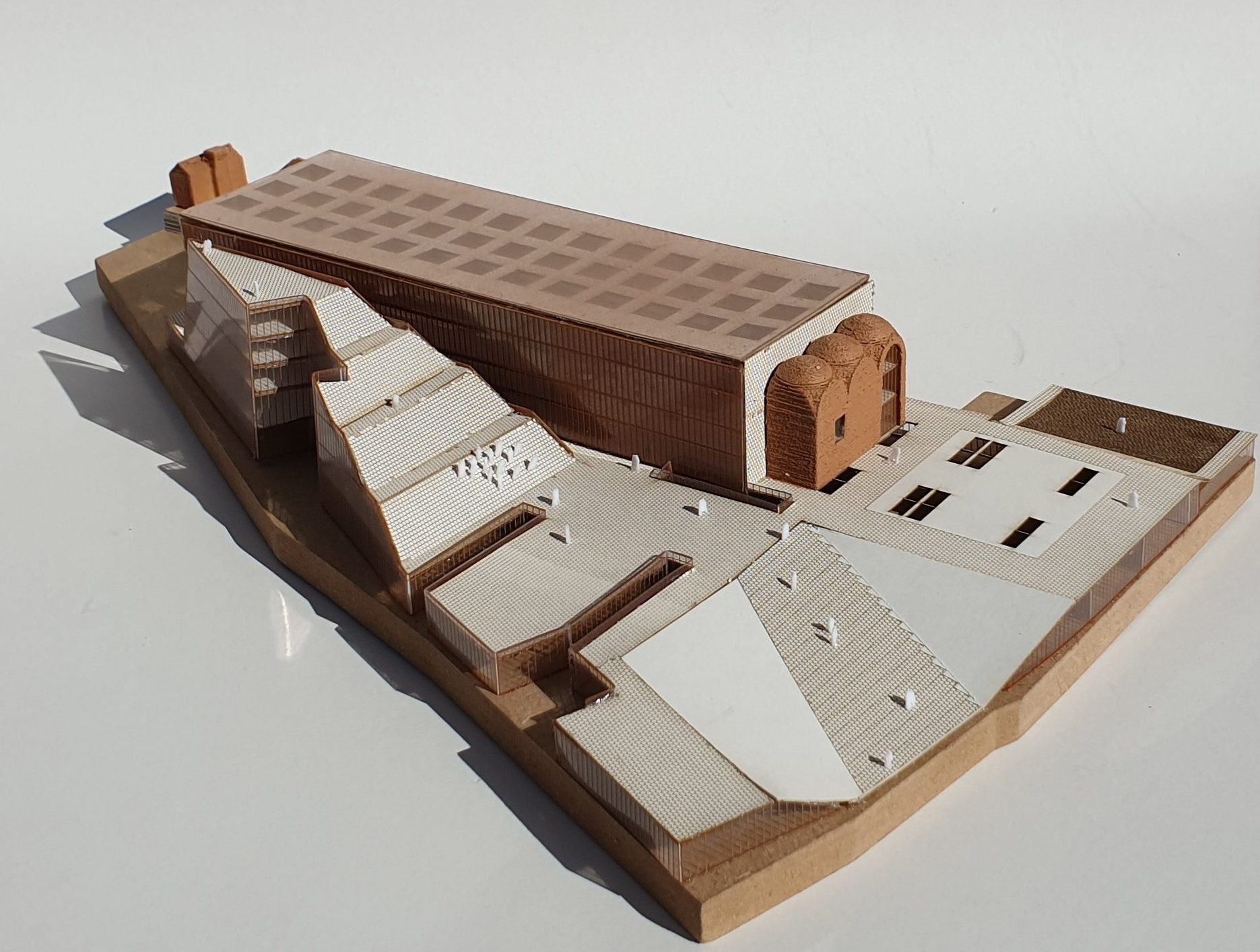 In contrast to the parade ground, we want to make the entrance to the university gentler and more romantic. Below this area is the seminar center, which is independent from the north, accessible at ground level.

South of the new building of the main library is a second open area on the pedestal. This space is connected to the ground floor of the faculties. The connecting link is a twice as high, complex space, which traverses the building and at the same time serves as the entrance to the library. This central space connects both parade ground and buildings 5 ​​and 6. The entrance serves as a distributor of users to the seminar center, the library and various ancillary uses. Depending on the needs, the rooms are also developed elsewhere. The administration building is accessible via the upper floor as well as the H and I areas. Area J can be reached via the Arno-Holz-Straße and the main entrance. The area F is in house 5.

The internal administration is also accessible via the main entrance and the upper floor, which – + * can be reached via a staircase from the parade ground. The goods are received via the west facade. The area H is accessible via the reception of the library (area D).

The free area above the pedestal, south of the new building, should become part of the student life. There will be an outdoor space with tables and chairs for the cafeteria, as well as a stage for graduation parties, concerts, presentations and other events. The terraced building to the west offers seating and allows many people to attend events on stage.

The concept of the library: Four rooms within a room

The concept we use for the University Library as a place of learning, working and communicating is, in our view, a key concept for meeting today’s requirements for a library. A large library of such a collection of books represents, in our eyes, what constitutes civilization. This awareness of the physical presence of such a book collection was an important driving force and inspiration for us as architects. 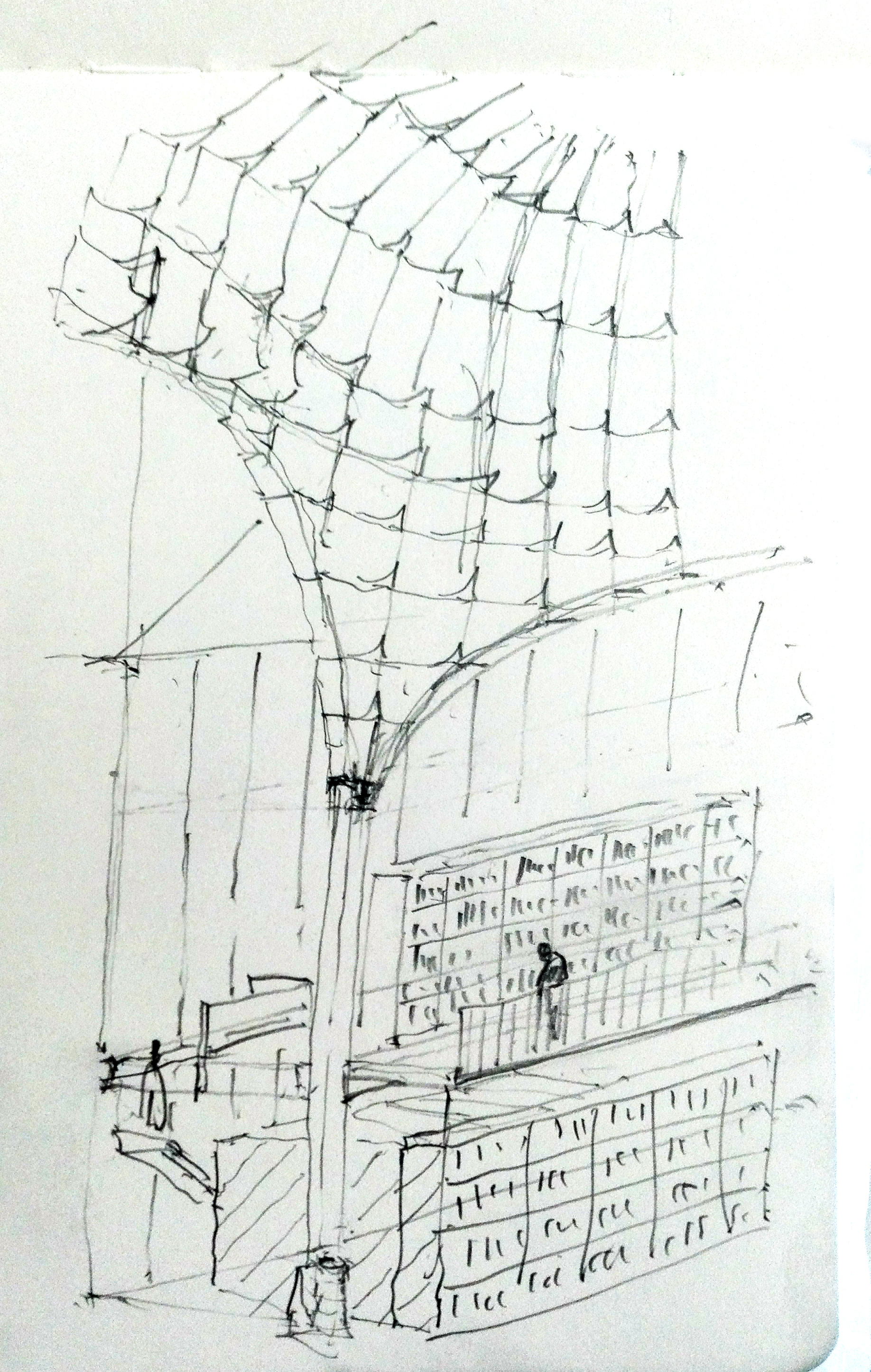 We believe that it is possible to address all the issues raised without necessarily choosing four small, differentiated areas. From a practical point of view and in our experience it does not make sense to share too much. The philosophy student often has to access history books and the same applies to the other disciplines. So we did not interpret the concept of “small libraries in the library” as meaning that a large library is shared by walls, but the different spaces are organized as “4 spaces within a space”.

We designed a large open space that builds on the tradition of large libraries. The requirement for easily accessible areas for working groups is fulfilled by the design of corridors on the sides on two floors. These allow louder, quieter and more remote areas. In addition, we have planned the necessary seminar rooms accessible from the upper mezzanine floor.

There is also an open reading and relaxation area under an impressive height of 15 meters below the domes. This area divides the room and is acoustically separated by shelves and walls. 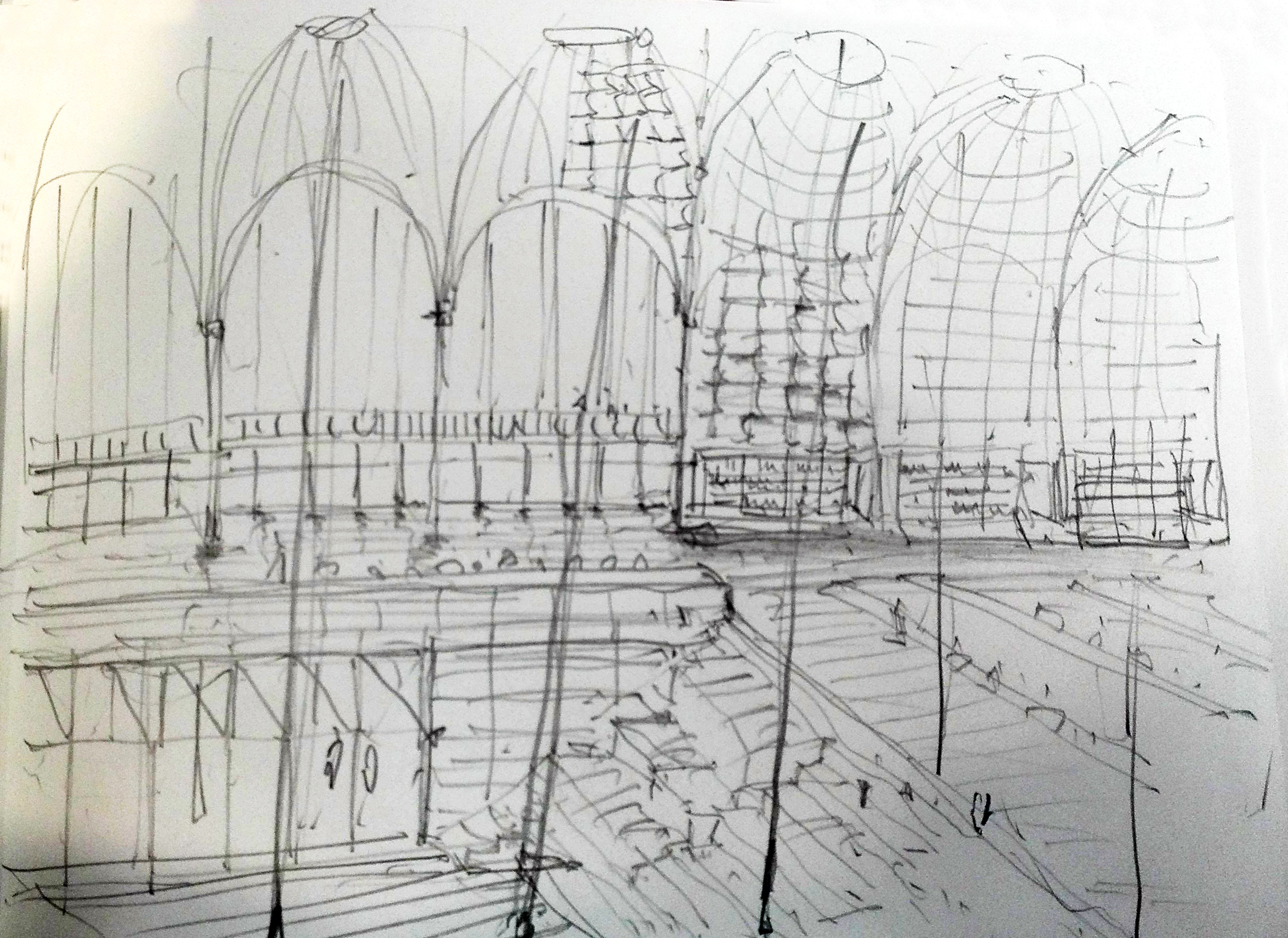 The acoustics of the central rooms must be carefully considered. Our experience is that library rooms, because of their size and shape, create a very powerful, quiet atmosphere. Only from this acoustic condition creates a very nice feeling of gravity and dignity. These qualities are very important for the academic life and the experience of the students. We believe that this building can be based on these values. There might be noise issues with dropped books or pens, but this can easily be accounted for by material selection and detail development of the floors and walls and ceilings. 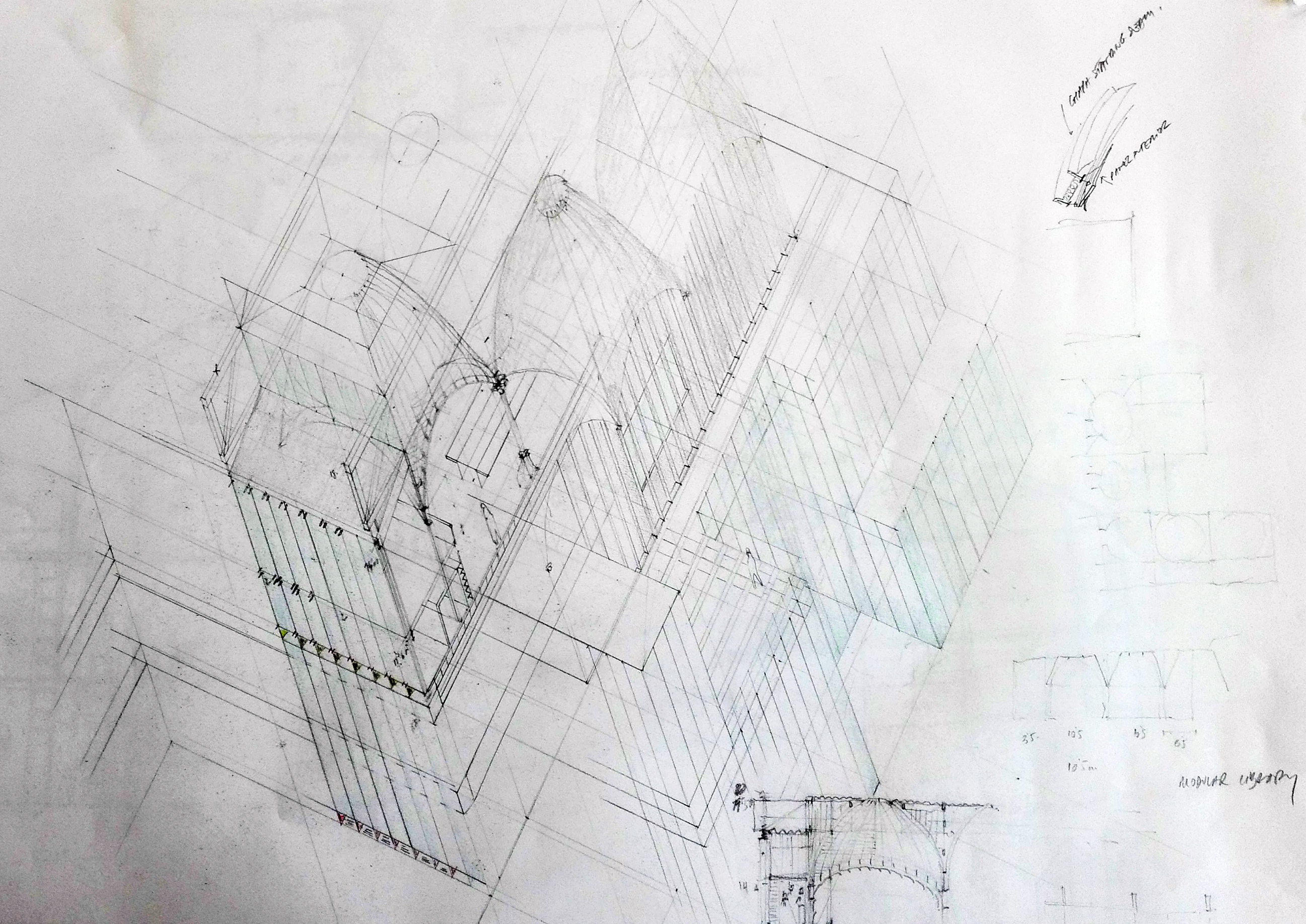 It is also important to balance the ratio between absorbing and reflecting surfaces. This task is taken over by the dome, which becomes an acoustic instrument. It prevents echoes and at the same time avoids an excess of sound absorption, which is very uncomfortable, even if we seek peace in this large room. As a material for the domes plywood boards are provided with a surface coating of brass, metal or aluminum and glass panes. The first variant would be acoustically absorbent perforated. The perfect combination of the three materials can be explored at a later stage in the detailed design. The ceiling panels also play a fundamental role in the evaluation of natural and artificial light. Openings and folds create rays of light that fall from the sky and create an absolutely magical atmosphere.

On the corridors the mobile shelves are housed, here are also the exit areas of the elevators and the internal stairs. The intermediate level above the main reading rooms offers further bookshelves, rooms for individuals, couples or groups as well as access to the seminar rooms.

As a façade system, a combination of different solutions with the same construction and parapet system is provided. Depending on the orientation, a more detailed analysis would be required: 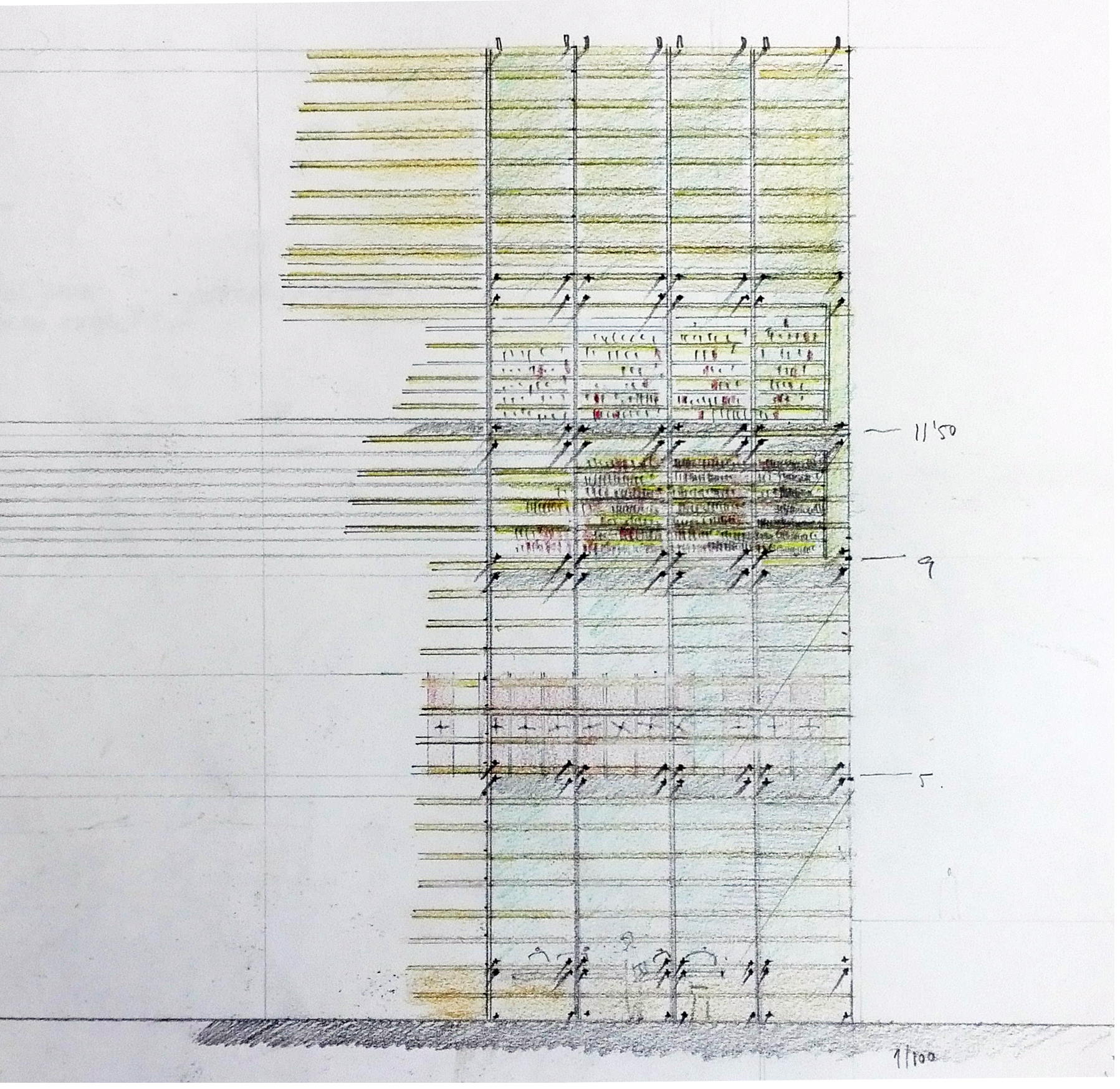 North orientation: In the middle of the 28 m long façade, triple glass with copper mesh, double gas cavity, U-value 0.6 W / m2ºK type Okatech. On the sides of the facade, a combination of opaque HPI insulating panels with a U-value of 0.1 W / m2ºK.

East and west façades: construction of highly insulated and solid (brick and tinted concrete slabs) with a U-value of 0.2 W / m2ºK. The diagonal facade of the stepped structure would be a combination of triple glass with copper mesh, Okatech type and opaque HPI insulating panels.

Our conceptual approach makes the reading room the central centerpiece. To the reading room, the other parts of the building are arranged as a protective shield to protect the interior from external sources of interference.

Through a simple logical structure, we promise to reduce energy consumption. A well-defined shell and a subsequent room organization are the basis for a good passive building performance. The side rooms and corridors next to the north and south façades filter the sunlight and serve as a sound, light and heat buffer, thus contributing to a stable atmosphere in the reading room. The roof and ceiling provide natural light that is filtered through the vault openings to create a diffused light environment. The lower floors, which house the bookshelves as well as the meeting and lecture rooms, complete the protective shield to the reading room. 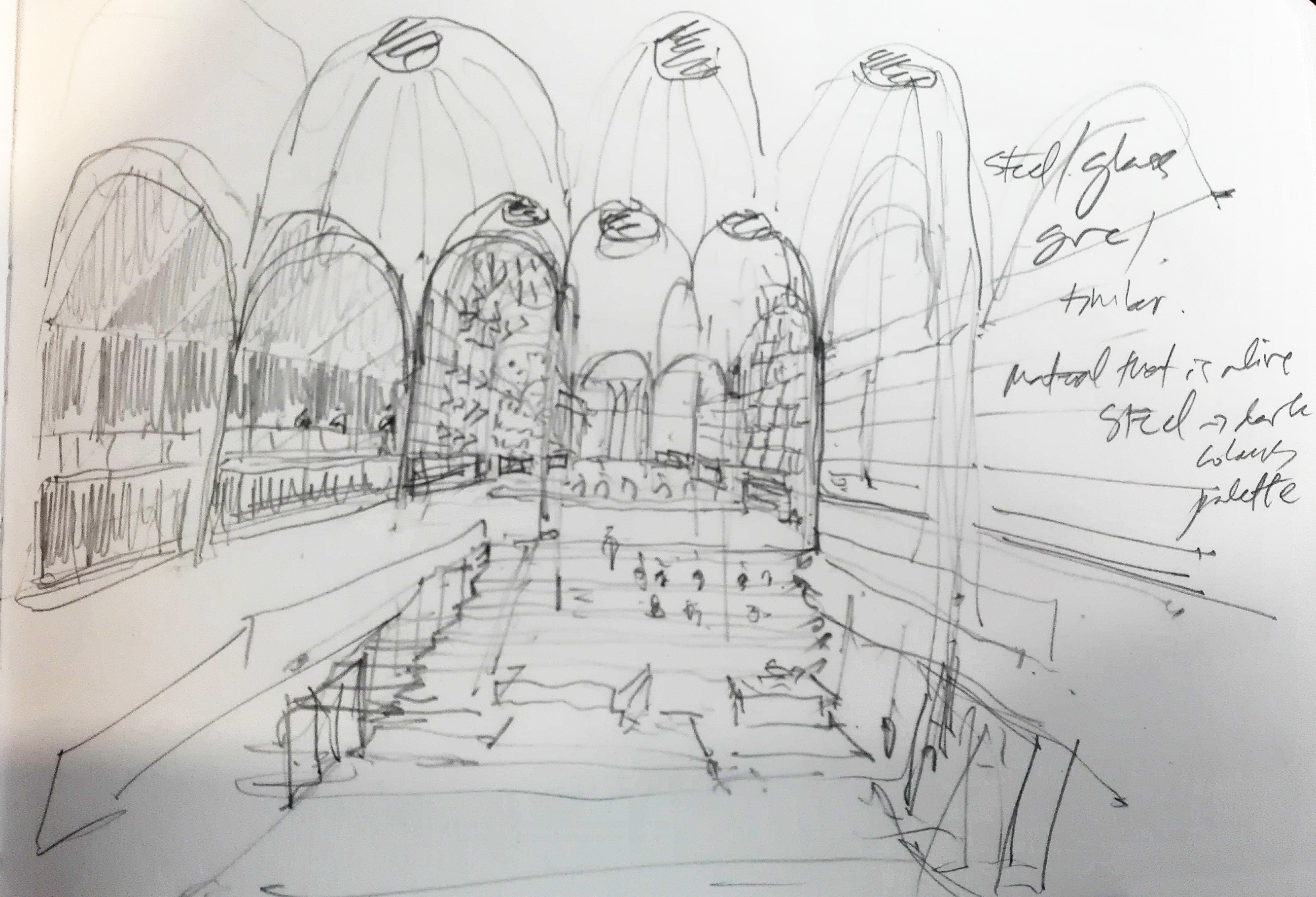 The Rostock library opens its shell to allow fresh air ventilation under appropriate external conditions. In this case we try again to meet the needs of the people with simple means.

The heat loads of the students, and the laptops are compensated with a slow displacement system. The heat accumulated at higher levels can escape through the porous roof from the building. 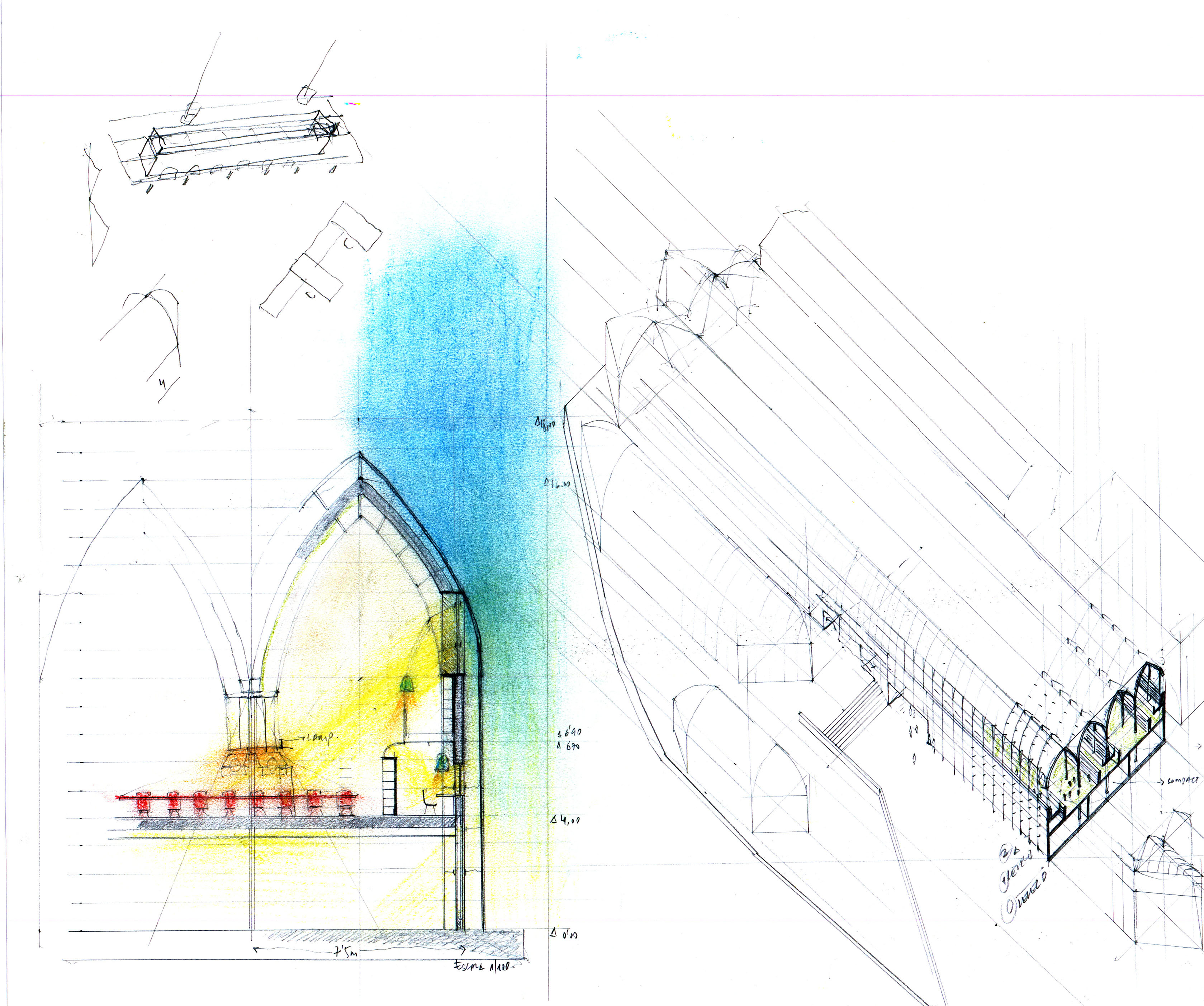 If required, the room articulation of the library promotes communicative work as well as individual individual work. Comfort is the key word: Find your place, feel at home, find what you need, create your own little environment.

Our funds are simple but effective again. We operate on four levels.

The temperature is continuously measured and controlled accordingly.

In the main reading room, slow-moving source air outlets equalize the heat generated by computers and users. In the large area of ​​the reading room, students have the opportunity to adapt their space to their individual needs. This can create larger jobs for groups, as well as small isolated plots. The individual lighting becomes an important element in the design of the room. The lighting fixtures should be simple and dimmable to adapt to different scenarios. The lighting conditions are homogeneous along the reading surfaces to reduce eye fatigue. The seminar rooms are well lit and can be completely darkened for presentations.

Daylight dimming control is based on photocells to maintain the required foot-candles in the room by reducing the light output of the electric lighting according to the amount of daylight in the room. The lighting is aligned parallel to the facades for maximum control.

The ventilation rates, in the acceptable ranges, are controlled based on the occupancy and / or the timer. In occupancy-based controls, a room occupancy sensor detects when the room is unoccupied by carbon dioxide sensors. This works in a similar way to lighting controls but with a longer time delay to prevent an HVAC cycle.

The control systems can be designed to adapt the supply air temperatures to the requirements of the zone with the highest cooling load. This minimizes the required reheating in the individual zones.

The MEP facilities will be located mainly on the mezzanine floor on the second floor of the library building, others are on the top floor level of the stepped building and below the slope in a basement floor.

The mezzanine floor of the library building on the second floor mainly houses air conditioners:

Displacement systems, these are used for the library. The air diffusion system consists of bottom air outlets

In a small basement below the entrance lawn the heaviest installations are accommodated:

The ceilings are designed as reinforced flat ceilings with a thickness of 0.30 m. The facade supports are made of structural steel (40×40 cm), the inner columns of reinforced concrete (80×40 cm). Steel trusses remove the vertical load of the roof surface on the side supports, creating a column-free space below the roof level. The upper chord is designed as a truss, the lower chord as tensioning rope. The structure required for stability is given primarily by the building height. The frame effect of a flat ceiling and a pillar is generally sufficient to provide the required strength and rigidity for a building with a height of more than about 4 storeys. The system of bars and flat slabs can provide suitable transverse stiffening.