House on the Cliff in the coast of Granada, Spain. 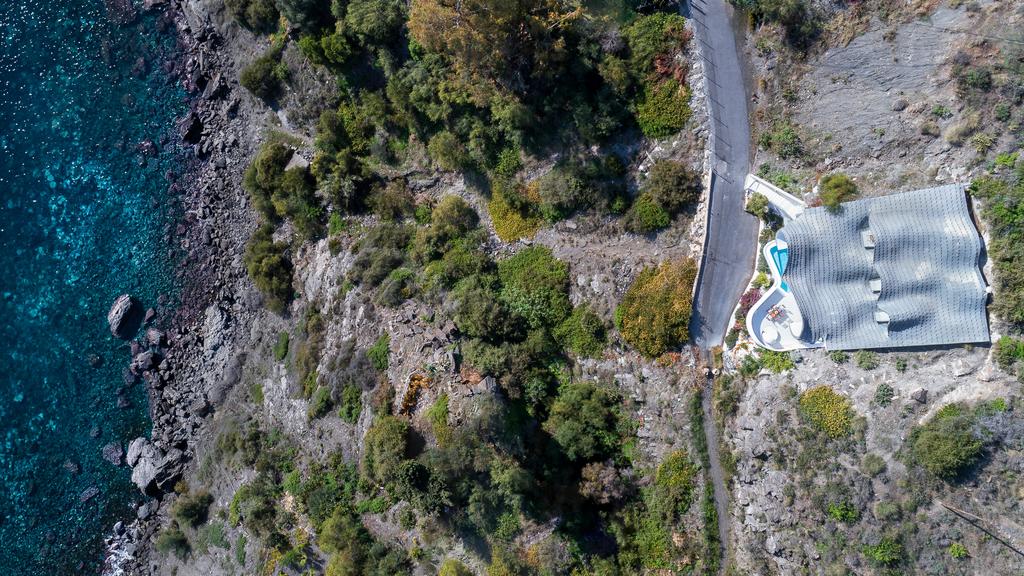 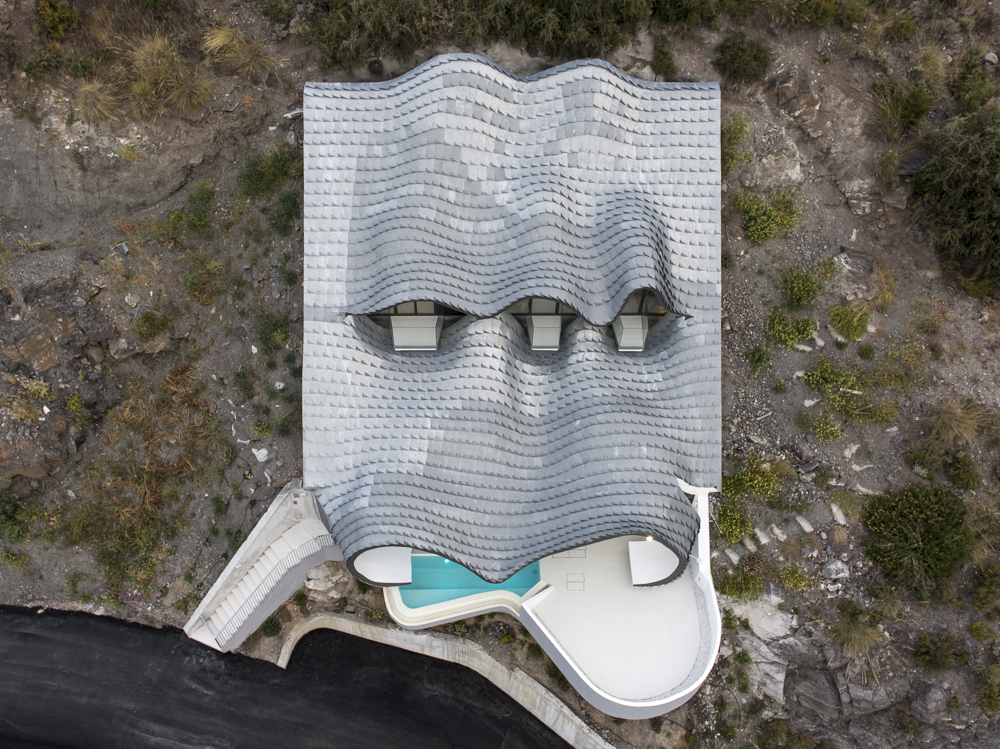 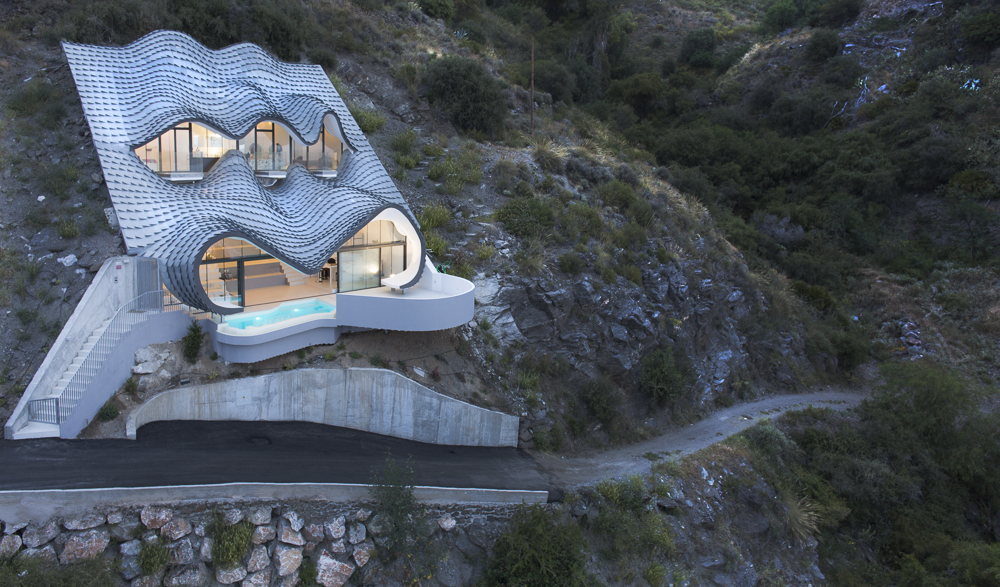 This house is a private commission made by a young couple who chose a difficult plot on a hill with an inclination of 42 degrees, in front of the Mediterranean Sea with breathtaking views. The task has been to integrate the house within the magnificent landscape that surrounds it and to direct the livable spaces towards the sea. It has also been about working with an extremely tight budget, a complex site and ambitious ideas both from the client and the architect. 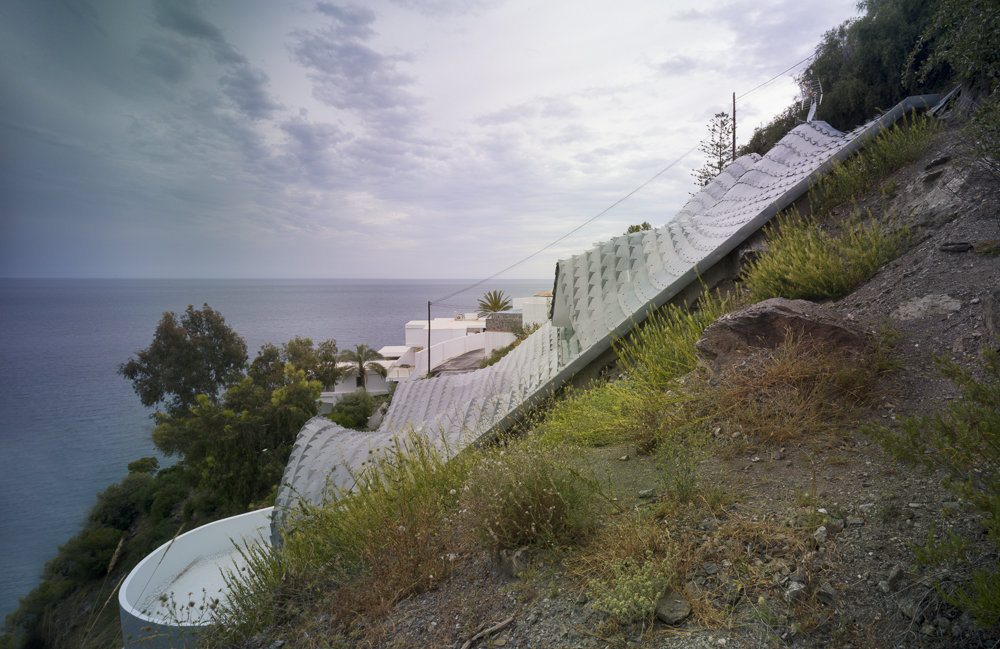 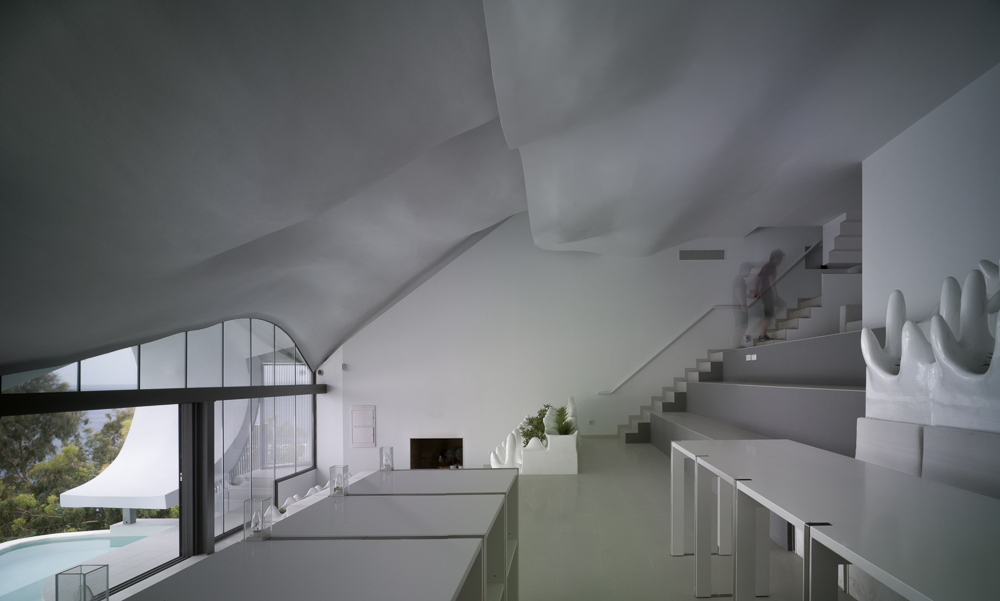 The House as a Joyful Domestic Stage
The house is developed on two floors: a large terraced living area, following the slope of the mountain, connected to a cantilevered terrace with a swimming pool, and a second floor with rooms that have viewpoints above the roof. The house is buried into the steep slope and benefits from the annually constant temperature of 19´5ºC of the ground. The livable spaces are covered by a curved double shell of reinforced concrete which plays with the geometry of the ground while framing the views and orienting the airflows that come from the sea into the interior. This shell is supported on the retaining walls that are 14,5 meters apart from each other, with no other internal supports, columns or walls. Thanks to this, the main space of the house, organized into designed islands of activity, can also become a stage and an auditorium for 70 people, also handy to host large parties, completely open to the landscape and with an ancillary terrace separated by a movable glass facade.
The metallic roof produces a calculated aesthetic ambiguity between the natural and the artificial, between the skin of a dragon set in the ground, when seen from below, and the waves of the sea, when seen from above. 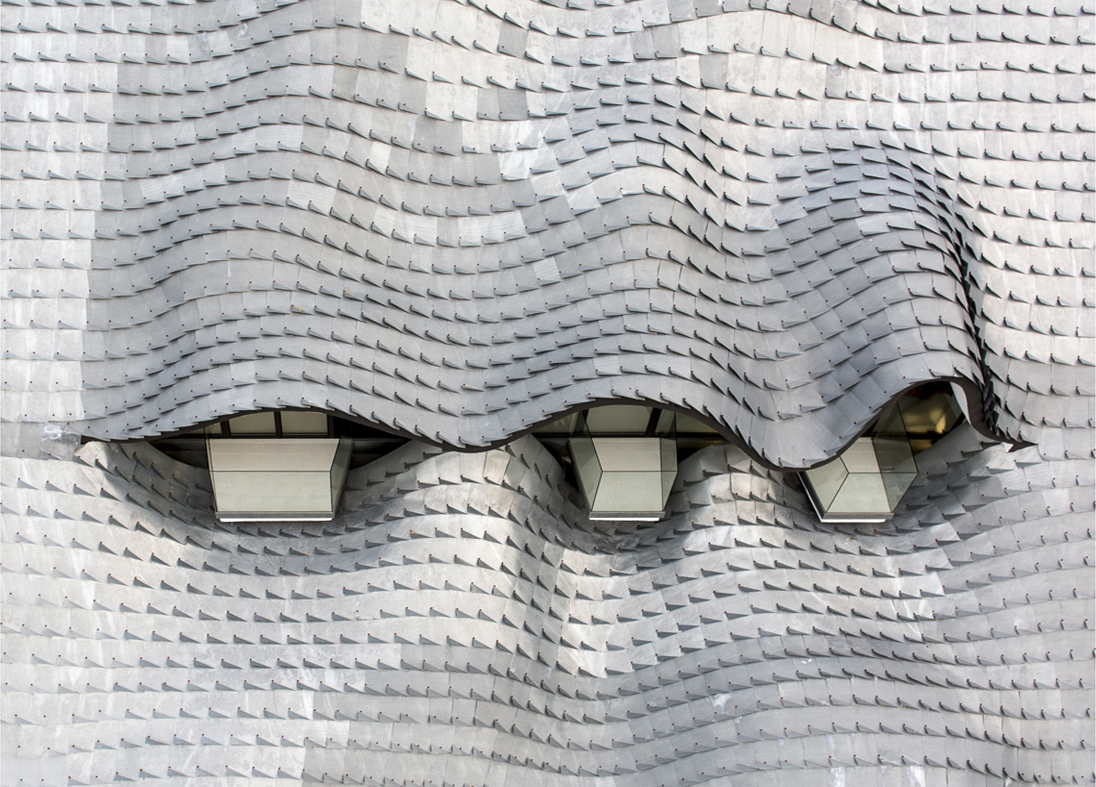 The comeback of craftsmanship
The construction of the House on the Cliff relies heavily on craftsmanship and local labor. The house was to be built during the worst possible financial crisis on Spain, with 26% of unemployment in our country, and close to 36% unemployment rates in the region where the house was built. In this social context we decided to avoid machine made industrial construction systems and develop an architecture that is based on many hours of labor. The most complex elements of the house can serve as an example of this approach: the reinforced concrete structure of the roof, based on a manually executed metal formwork, the tiles that cover the roof handmade and hand put, the ceilings made of gypsum plaster, the interior bespoke furniture made with fiberglass and polyester resin are all designed through digital design software, but manufactured by hand on site, using the ancient method of “measuring from plans” and also allowing room for the workers creativity and abilities to achieve the general aesthetical goals that were discussed during the site visits. 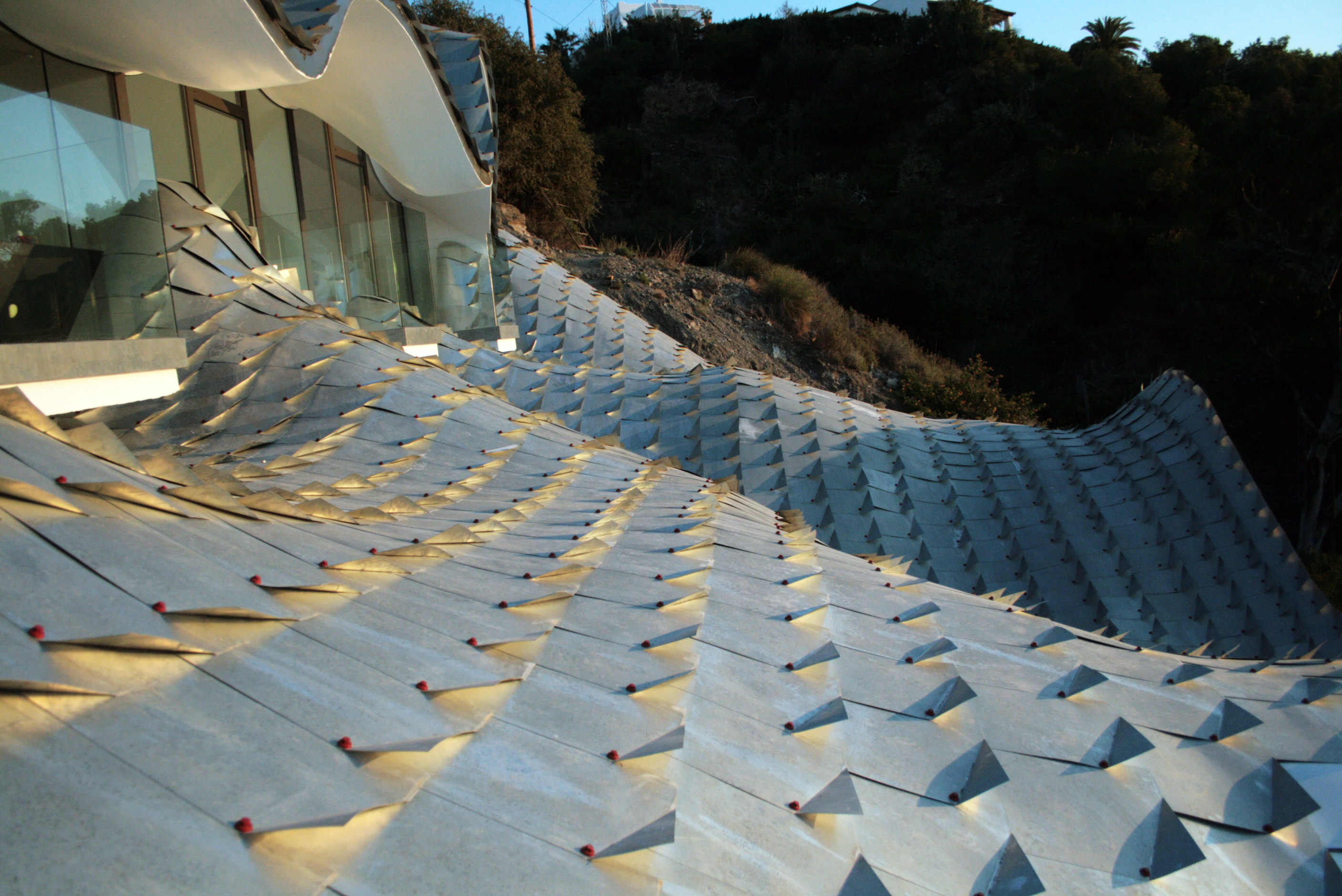 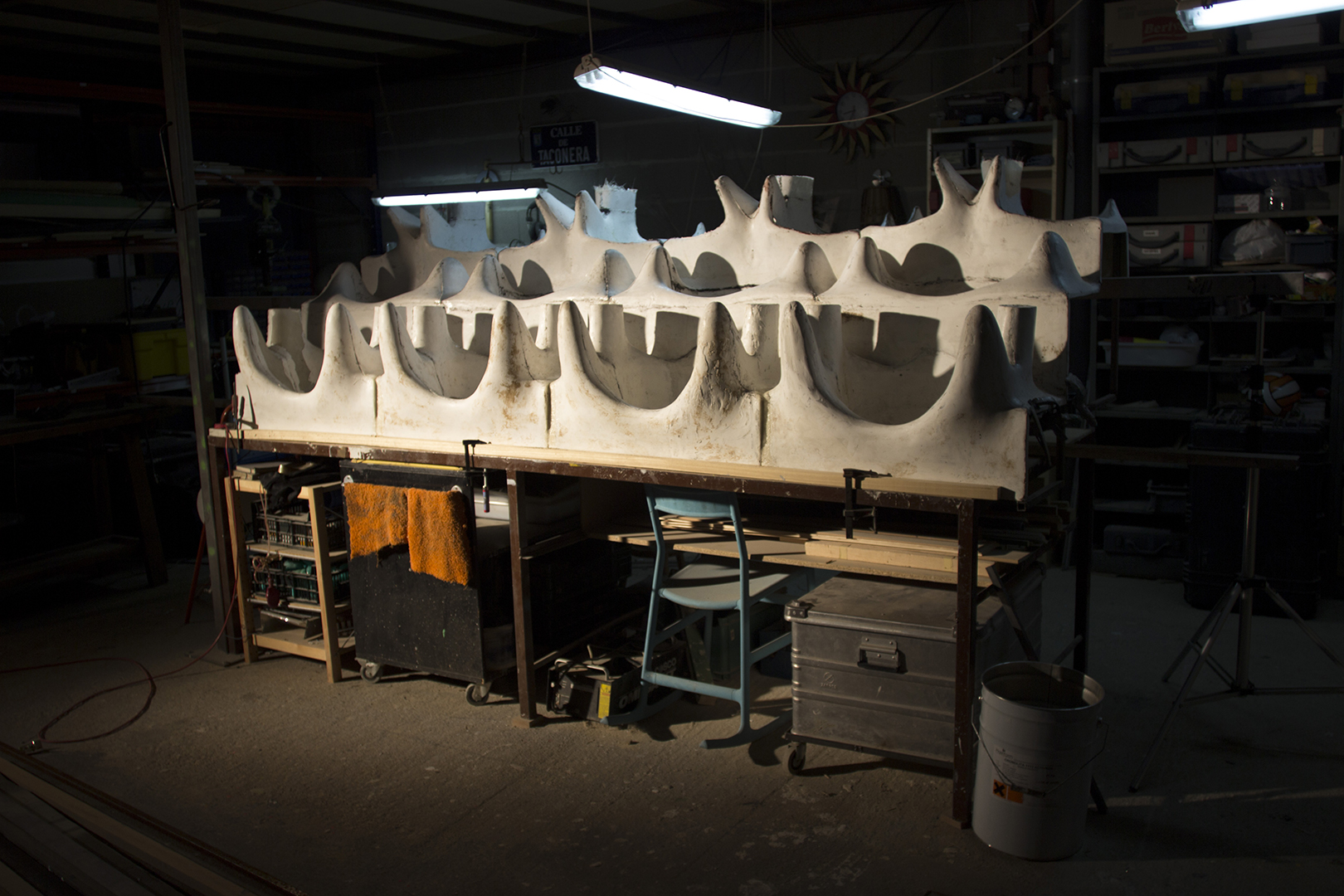 Apart from this aspect, this decision has proven to be important in other angles. Because of the complexity and the beauty of the house and the skills that had to be developed, It has been a challenge for the people involved on the site, and it has proved that everyone is ready to give the extra mile when there is an ambitious goal that point towards a result that is of worth. This increases the quality of the construction, but also, and most importantly, it has been very important for the laborers as it represented for them a way of testing, learning and finally showing their abilities that potentially opened them new possibilities of work. This has also served them in regaining the dignity lost in their profession, as industrial construction products are quite boring to put together, especially when a similar action has to be repeated endlessly. 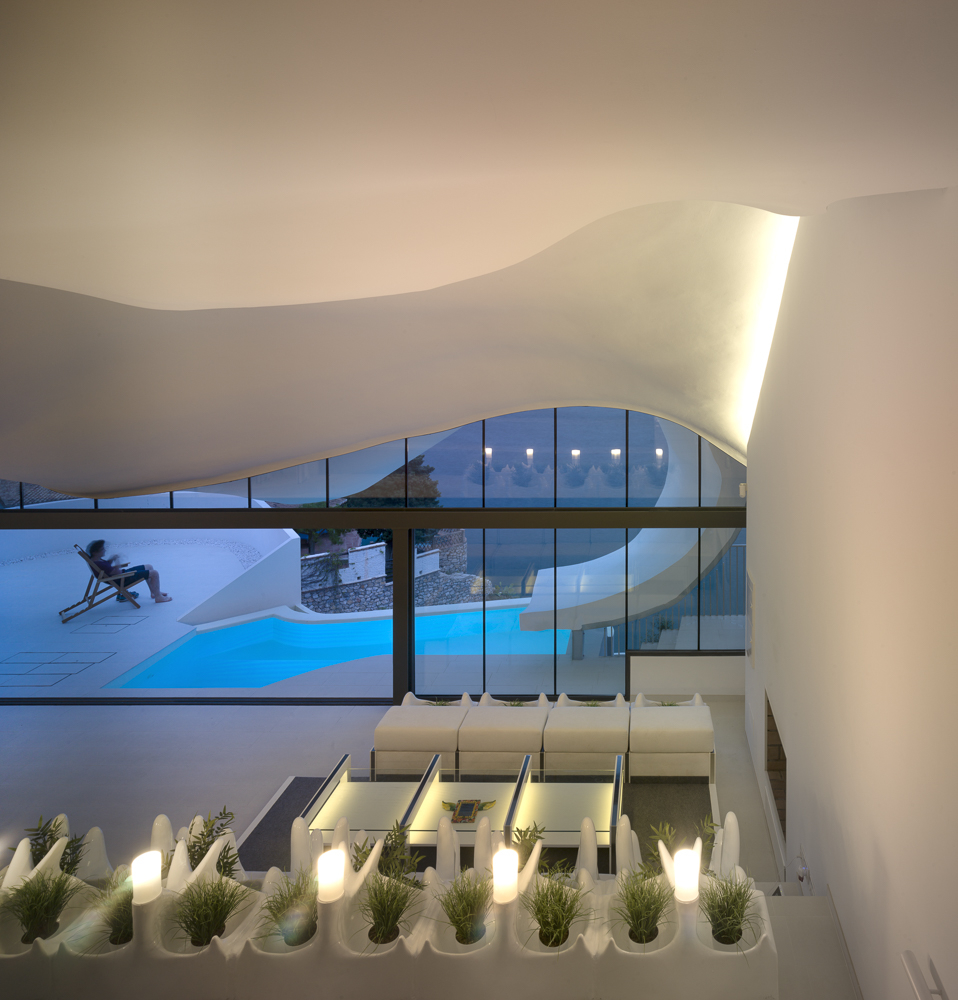 A beautiful and useful building does not have to be an expensive building
The house features two complex elements that have been economically feasible thanks to technical innovations. The roof was produced through a handcrafted formwork system develop on a patent by a local engineer Dr. Manuel Rojas, using a very efficient deformable metal mesh. This technique was manufactured at a much lower cost with respect to the options that are commonly used in construction such as timber or steel formworks. The finishing surface of the roof is composed by zinc scales placed and fabricated by hand from raw material. This has reduced the cost if compared with prefabricated systems offered by the industry. Similarly, the fabrication of the furniture is made completely by hand from digital models. These techniques that jump between the manual and the digital have produced a unique blend of qualities. 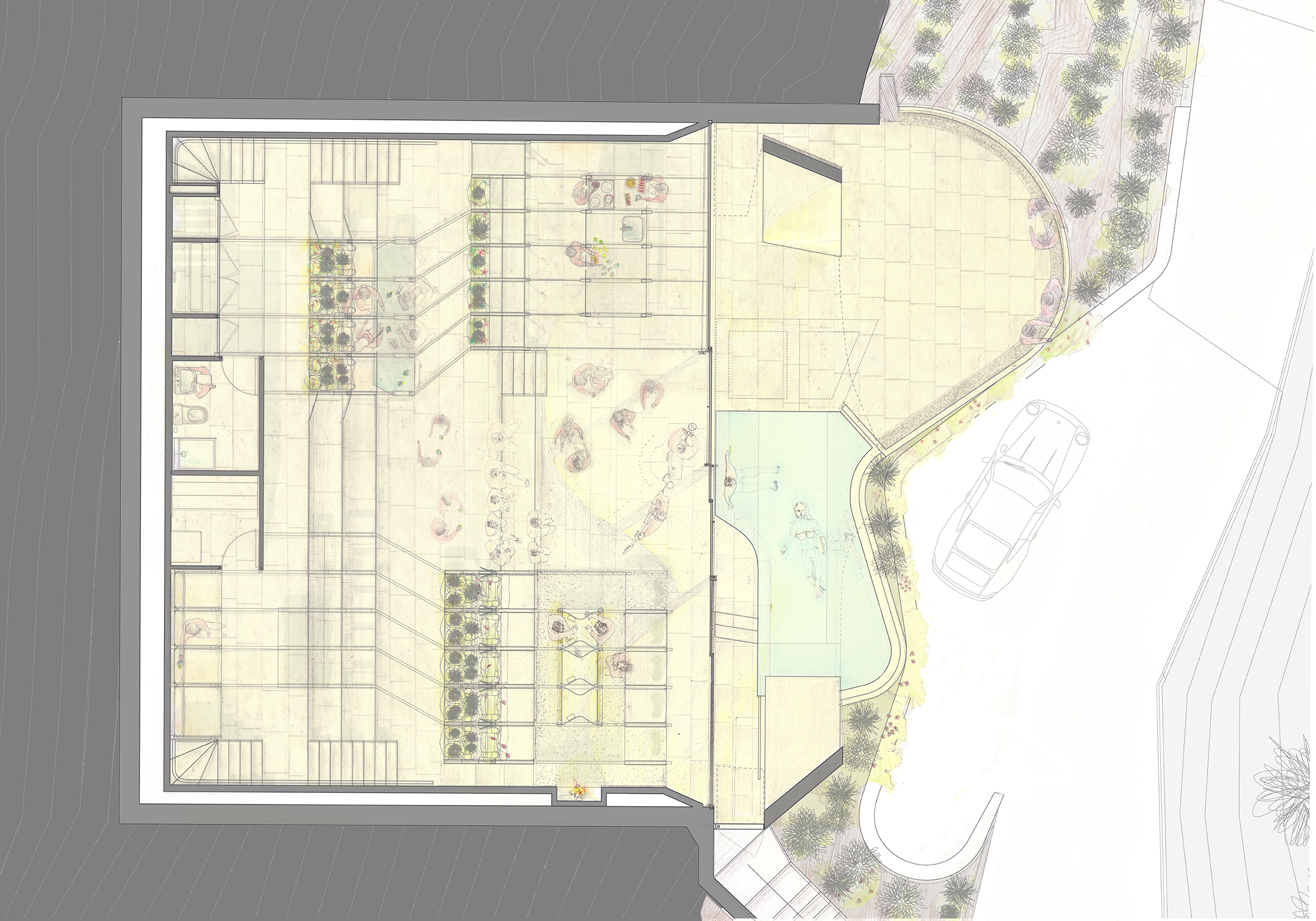 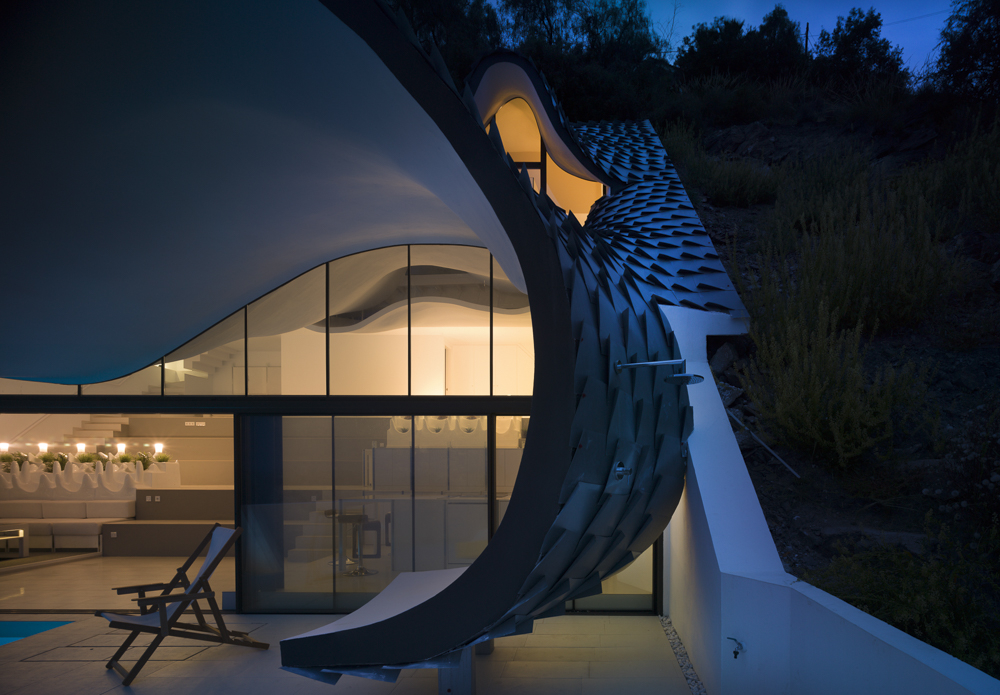 A Gaudiesque contemporary cave: environmental approach
Regarding energy performance, the house is inserted in the ground and we have used in our benefit the constant temperature of the ground, 19,5 º C through the year. Between the interior and the retaining walls there is a 40 cms air cavity that is used to regulate the amount of air at 19,5ºC that goes into the house, how much goes into the pre-cooling or pre-heating of the HVAC system, and how much has to be ventilated in order to control the humidity levels. The air cavity is sensorized and controlled intelligently but with a manual overrun when needed. Another important feature is that the roof is a double curved concrete shell, each shell 7cms of concrete, and it has 40 cms of insulation in between that served as the formwork for the concrete of the upper shell. This, being a cheap construction method, allows for a magnificent mix of insulation and thermal inertia. In result of these two features, the house does not use any form of heating or cooling during the year.
The concrete plant that delivered to the site is less than 10 kms away and supposed a large reduction in carbon emissions. 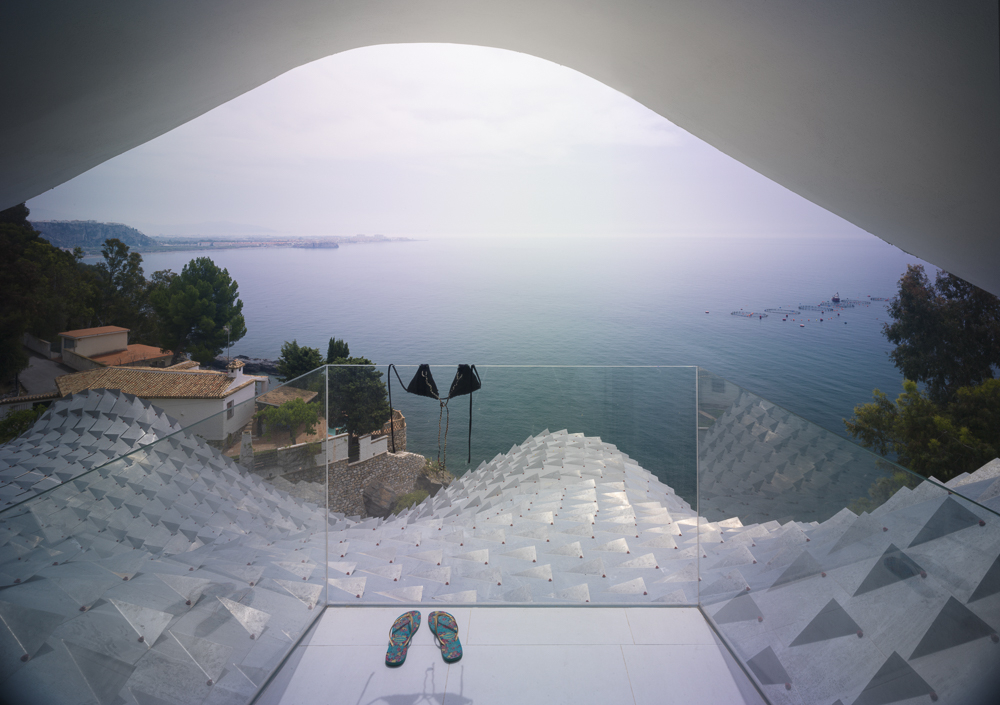 The house within the context of architecture in Spain
The industry of construction and the large developers who have been producing buildings of poor quality and little added value over the last two decades in Spain have created a culture of low demand and denial, installing in society the idea that bad architecture that surrounds us is a necessary consequence of our era. This house shows that another construction is possible and that the developer and the user have the possibility of obtaining a better product at an affordable cost. It is a matter of illusion, talent and commitment to an idea between all the parts. 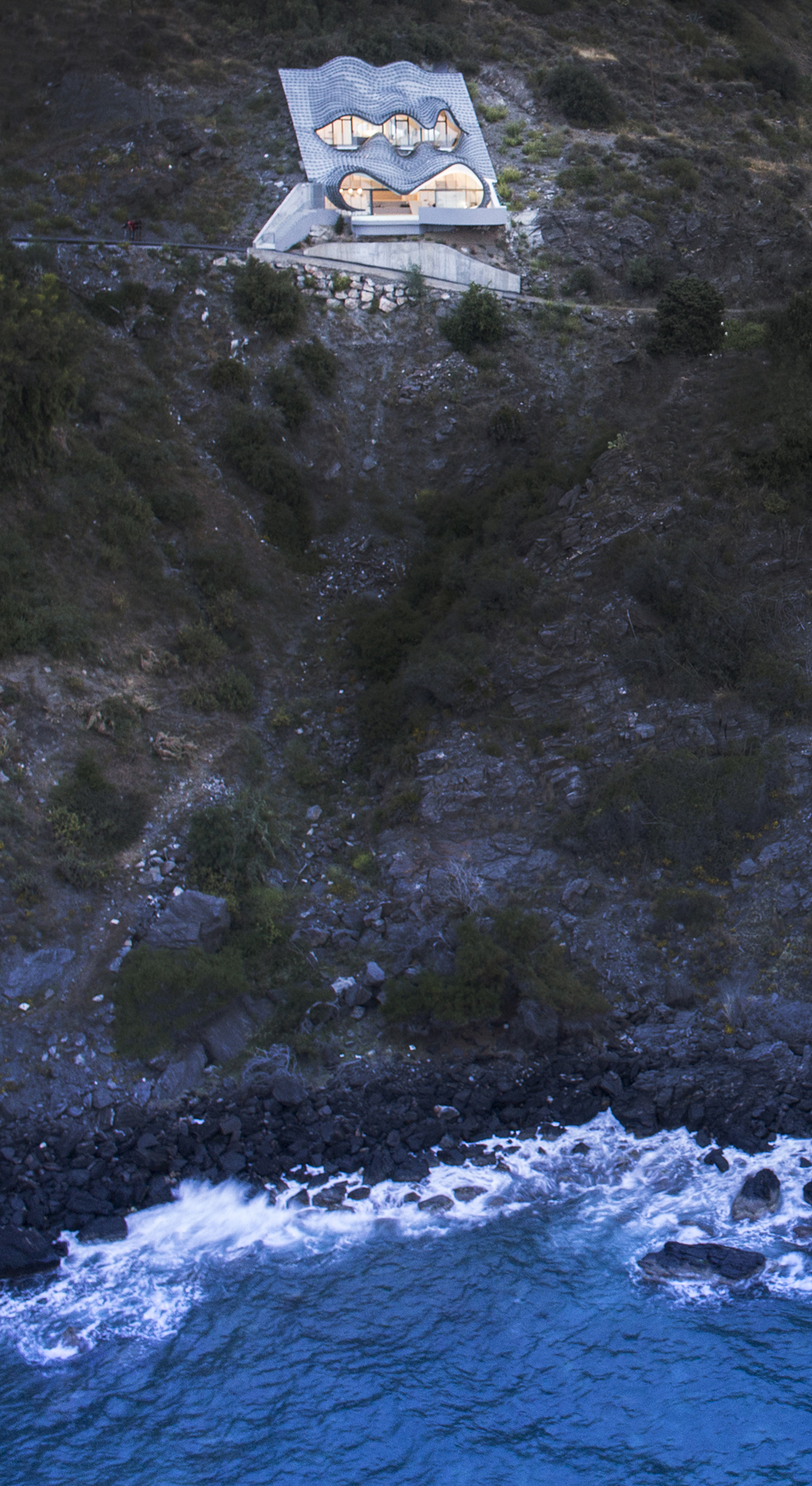