Allama Iqbal International Airport, (IATA: LHE, ICAO: OPLA) is the second largest civil airport in Pakistan, serving Lahore, the capital of Punjab province as well a large portion of the travellers from the Punjab province. Originally known as Lahore International Airport, it was renamed after Allama Iqbal, one of the pioneers that led to the creation of Pakistan.The airport currently has three terminals: the Allama Iqbal terminal, the Hajj terminal and acargo terminal. The airport is located on eastern side about 15 km from the centre of the city. The airport is surrounded by a series of buildings that service the airport infrastructure which will also be extended and revamped. The new terminal airport, which includes the existing terminal, will cater for 20 M. Passengers/Year and over 8500 Passengers/Peak Hour and will have 17 bridges. The construction started in July 2017 and is planned in two phases 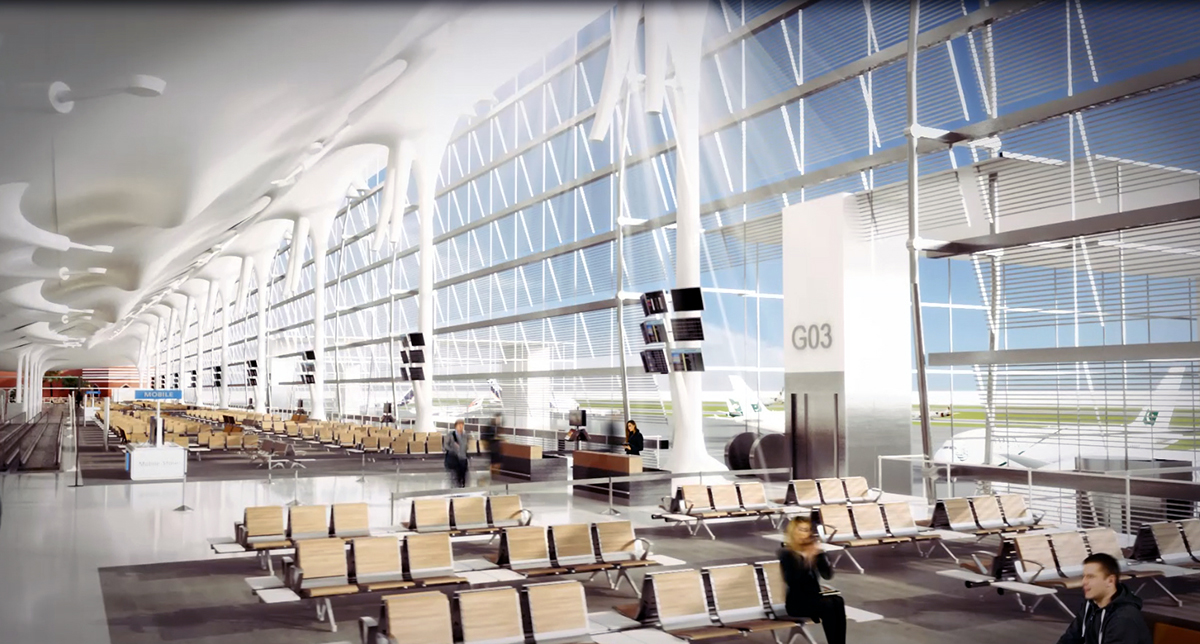 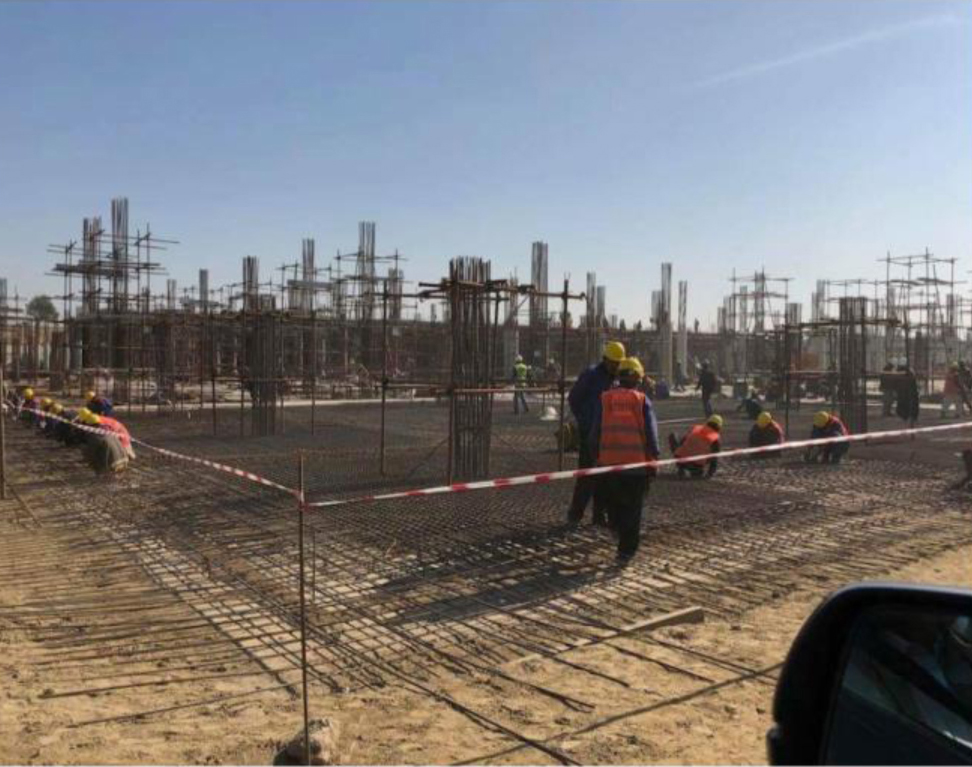 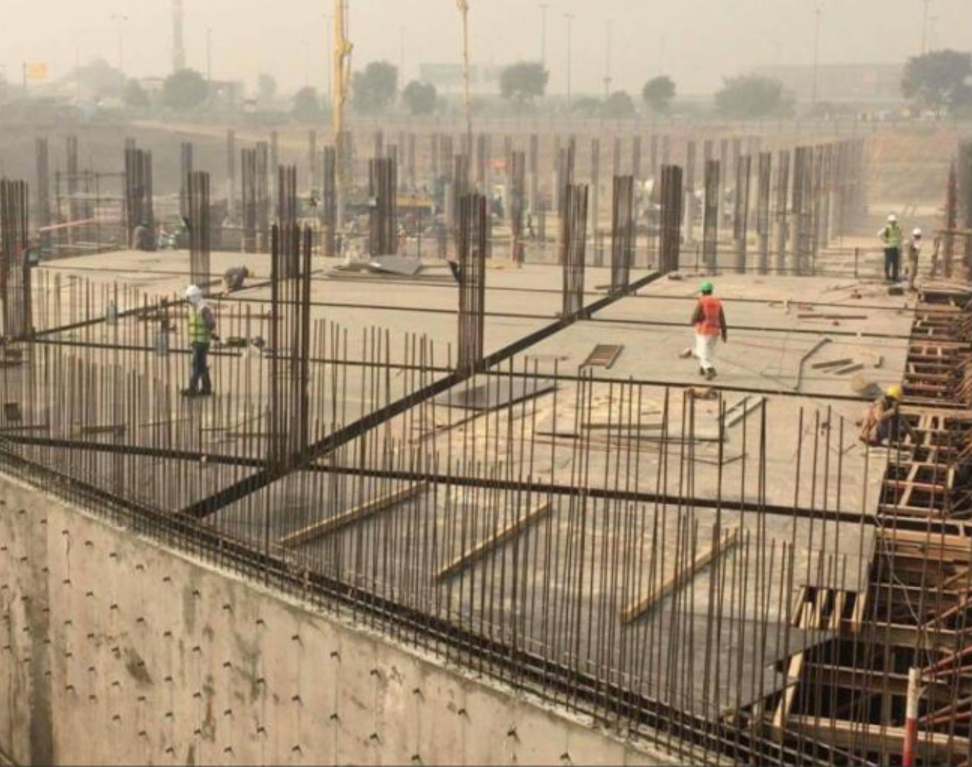 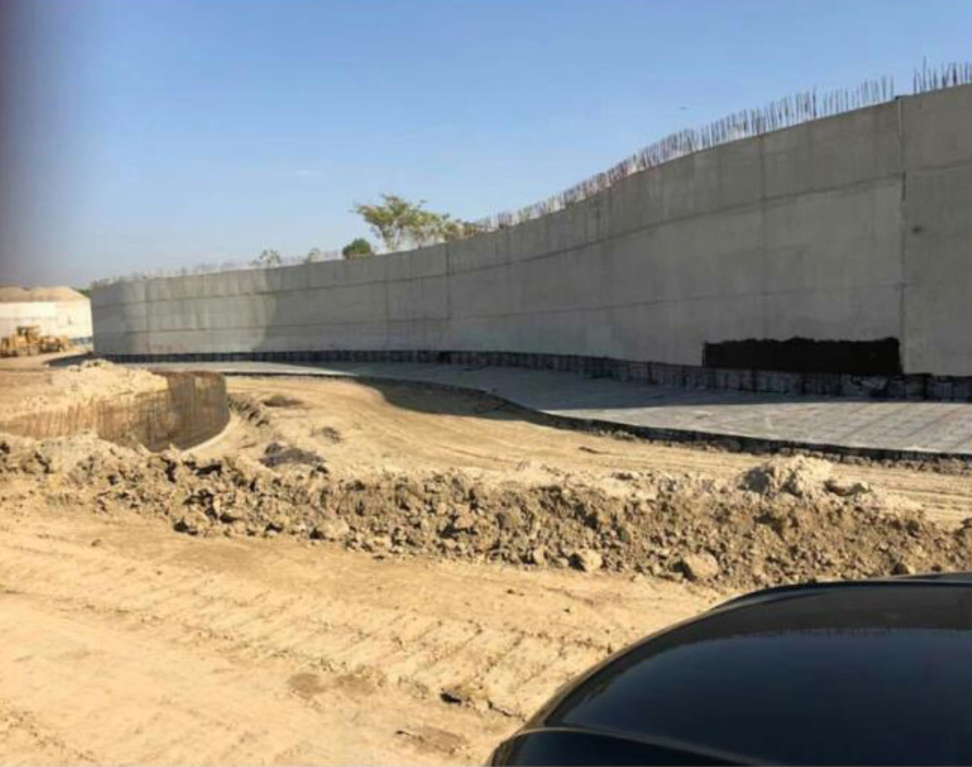 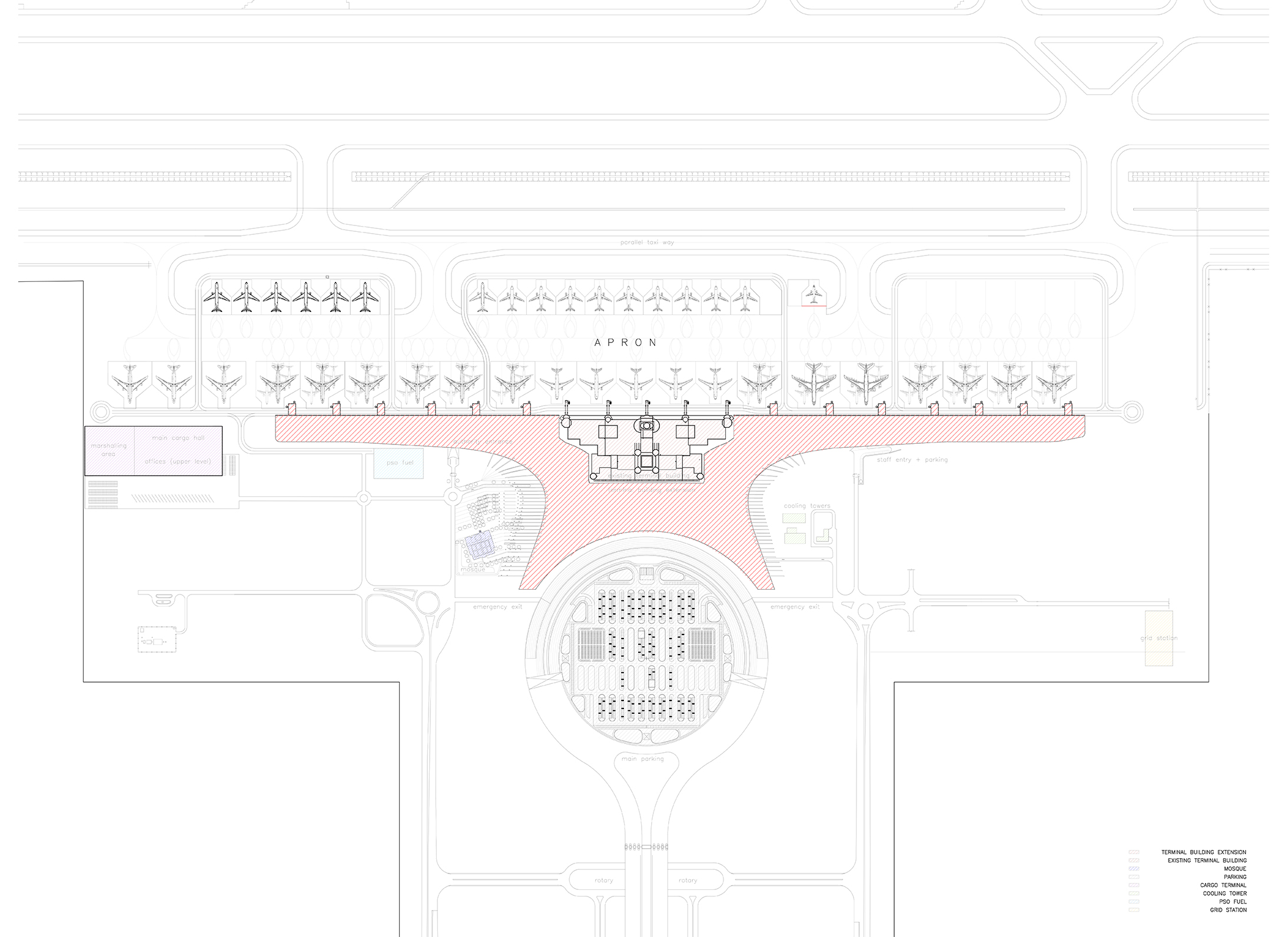 The expansion of the Allama Iqbal Int’l Airport to hold 20 million passengers attempts to respect the functional and aesthetic values of the existing terminal, and cater for the economic growth which this region of Pakistan is having. The instrument to achieve this relies on building around the existing terminal and leave a buffer zone to mediate between both buildings. This buffer zone is architecturally an open patio with a garden that will introduce light in both buildings and that it will be experienced from the different floor levels.
This approach allows for an easy phasing of the works, keeping the existing building completely functional until the new terminal is built. Once the new terminal is complete, the old terminal will be functionally connected to the different areas of the processor.
Continuous spaces are created, linking the new and old spaces so that passengers can flow seamlessly between them. This also allows for a complete flexibility in establishing the limit between the International and Domestic parts of the building, which can change through the incorporation of an ad-hoc light wall at any given moment.

This organizational principle requires that the height of the different floor levels is maintained in both existing and new levels, so that the connections are simple and functional. The connections in levels above ground floor are made through glazed bridges that connect existing openings in the façade of the existing building with the new terminal.

Continuous spaces are created, linking the new and old spaces so that passengers can flow seamlessly between them. This also allows for a complete flexibility in establishing the limit between the International and Domestic parts of the building, which can change through the incorporation of an ad-hoc light wall at any given moment. 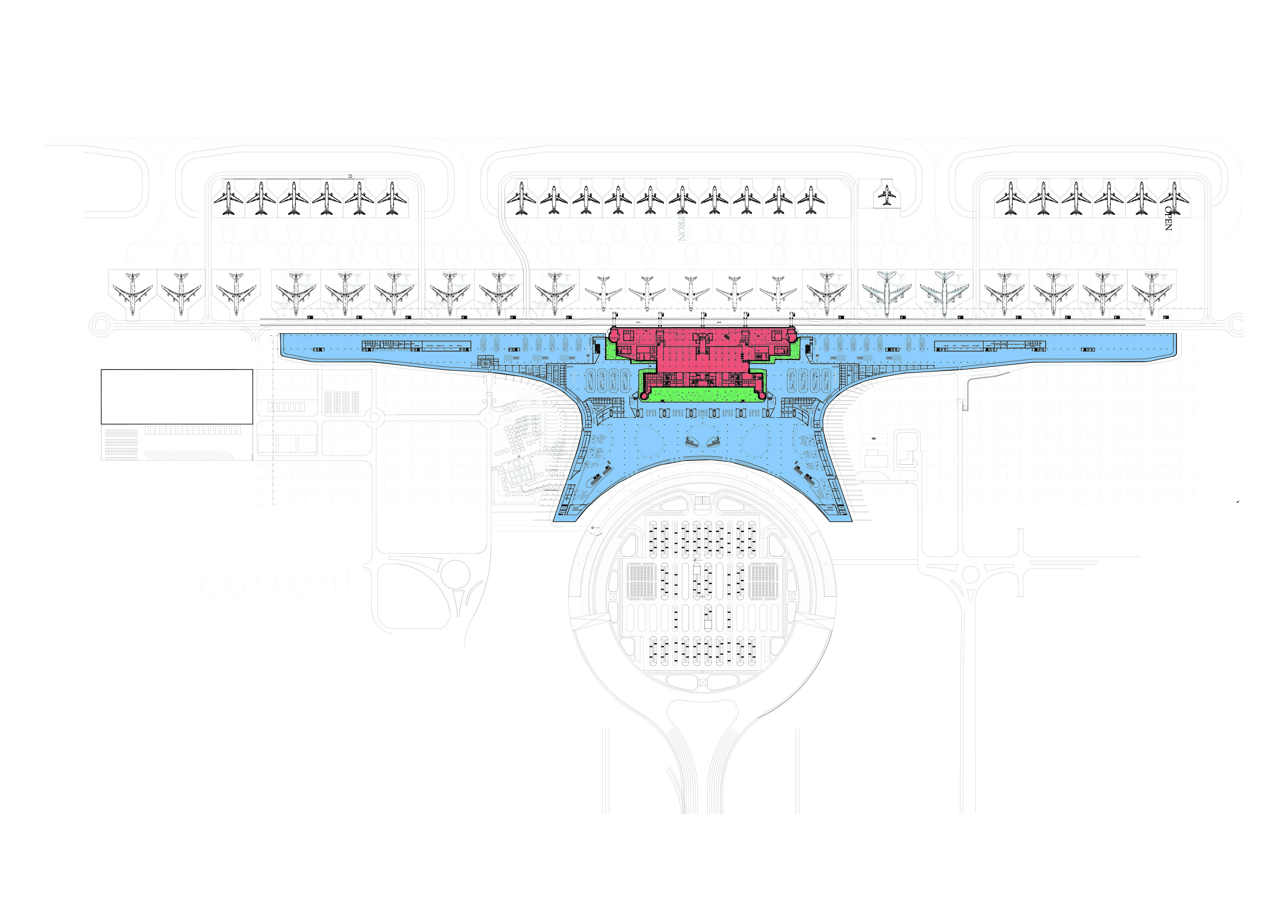 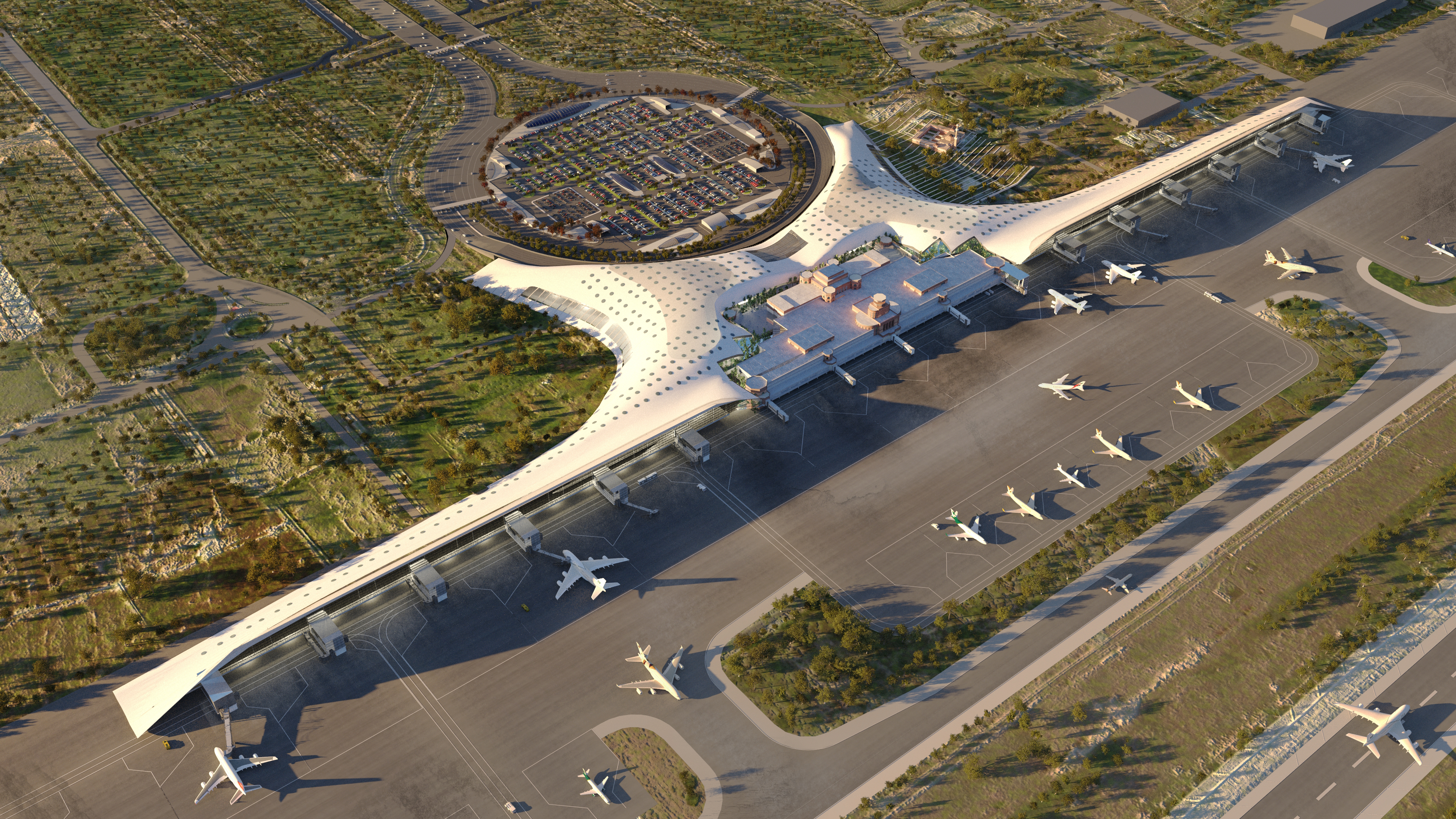 A main design feature is to integrate the new terminal building within the flat landscape in which it seats, respecting the prominence of the existing terminal building from the views that take place while approaching the terminal through the access roads. The prominence of the Mosque, which seats on the side of the terminal, has been also considered in various ways. First, integrating functionally the Mosque with the large areas of the new Concourse hall. Travellers and their companions can access the mosque directly through a new landscaped garden, serving as the best possible prayer room in any airport in the world. Also the new terminal building is limited in height so that it is lower than the minaret.

The tradition in Pakistan is that the family and friends accompany the traveller to the airport to say good bye and to welcome him. The median value of 3 companions by traveller, given to us by the airport representatives, reflects that tradition. We have noticed that the time that the companions spend in the airport is also considerable. Following this, we propose to create a large Concourse Hall that will house travellers and companions, and that will provide for enough beautiful space so that coming to the airport becomes a memorable experience.

The Concourse Hall, used in this way, has also an incredible potential as a source of revenue through the outsourcing of restaurants, coffee shops and commercial concessions. In this sense we have designed a ring of concessionary units that surround the open Concourse Hall that will help to create a happy and vibrant atmosphere for all.

We understand this space as a potentially attractive area that could welcome not only travellers and companions, but also people that just go there to consume and participate in the various activities that could also take place 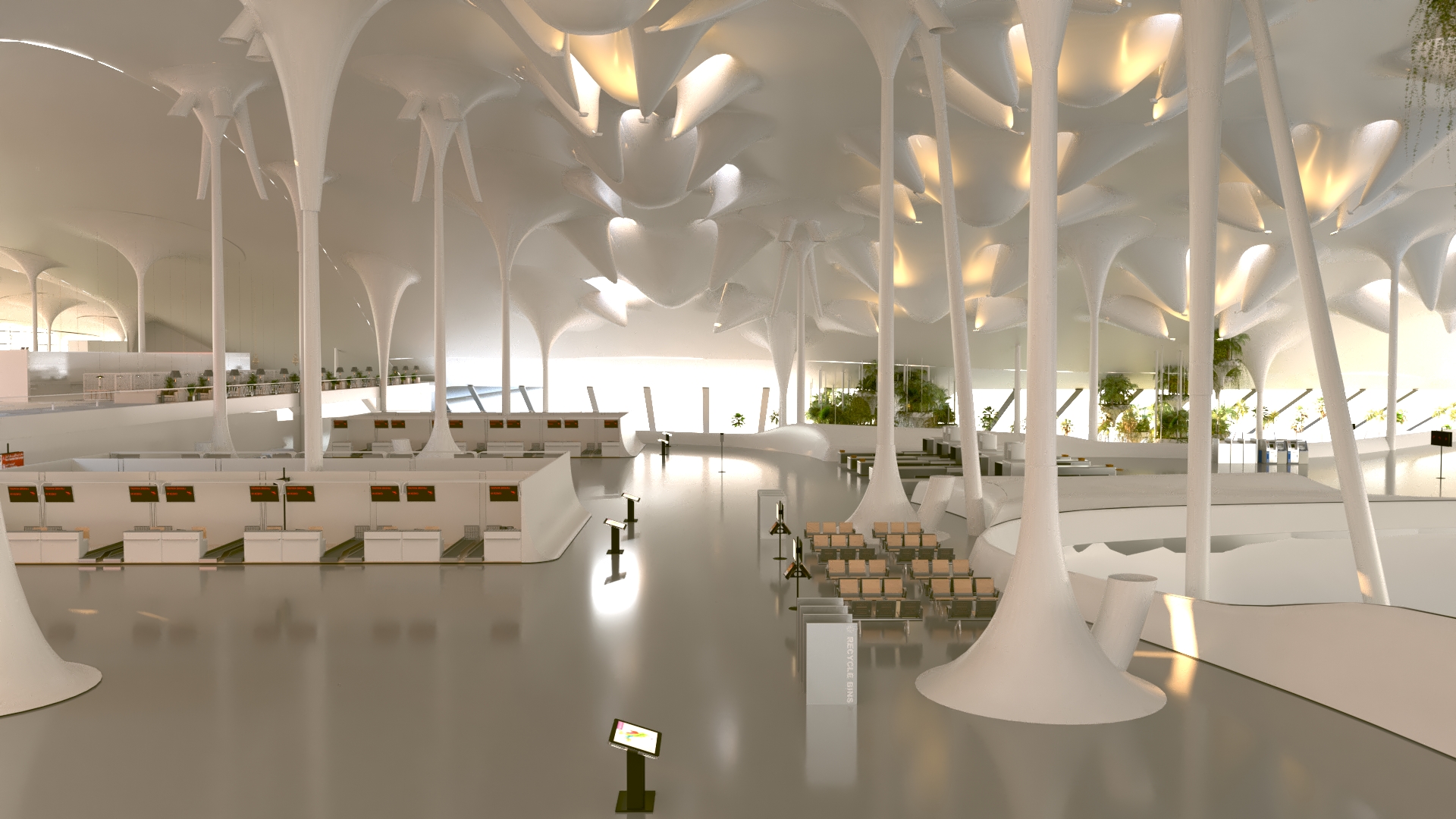 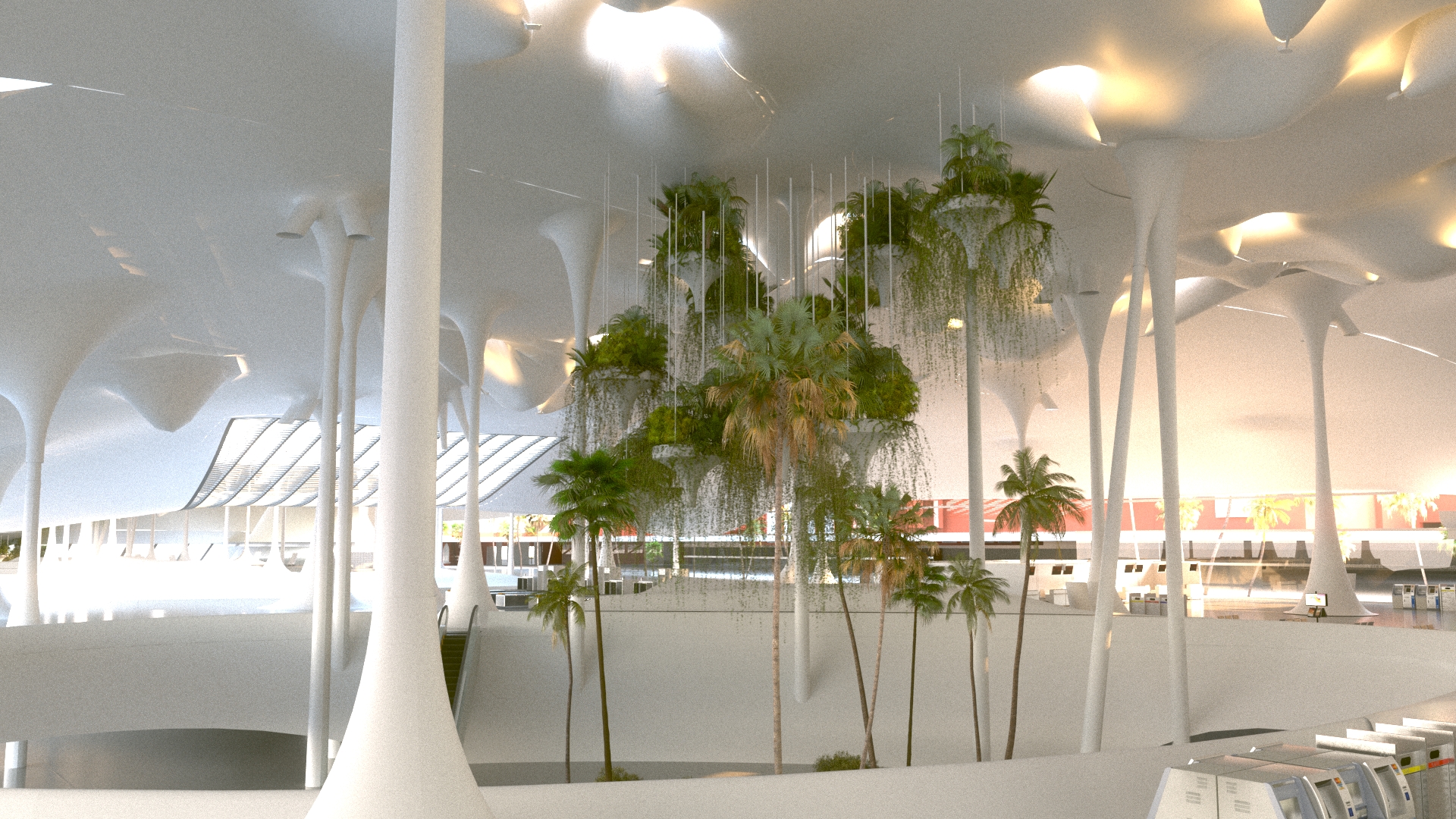 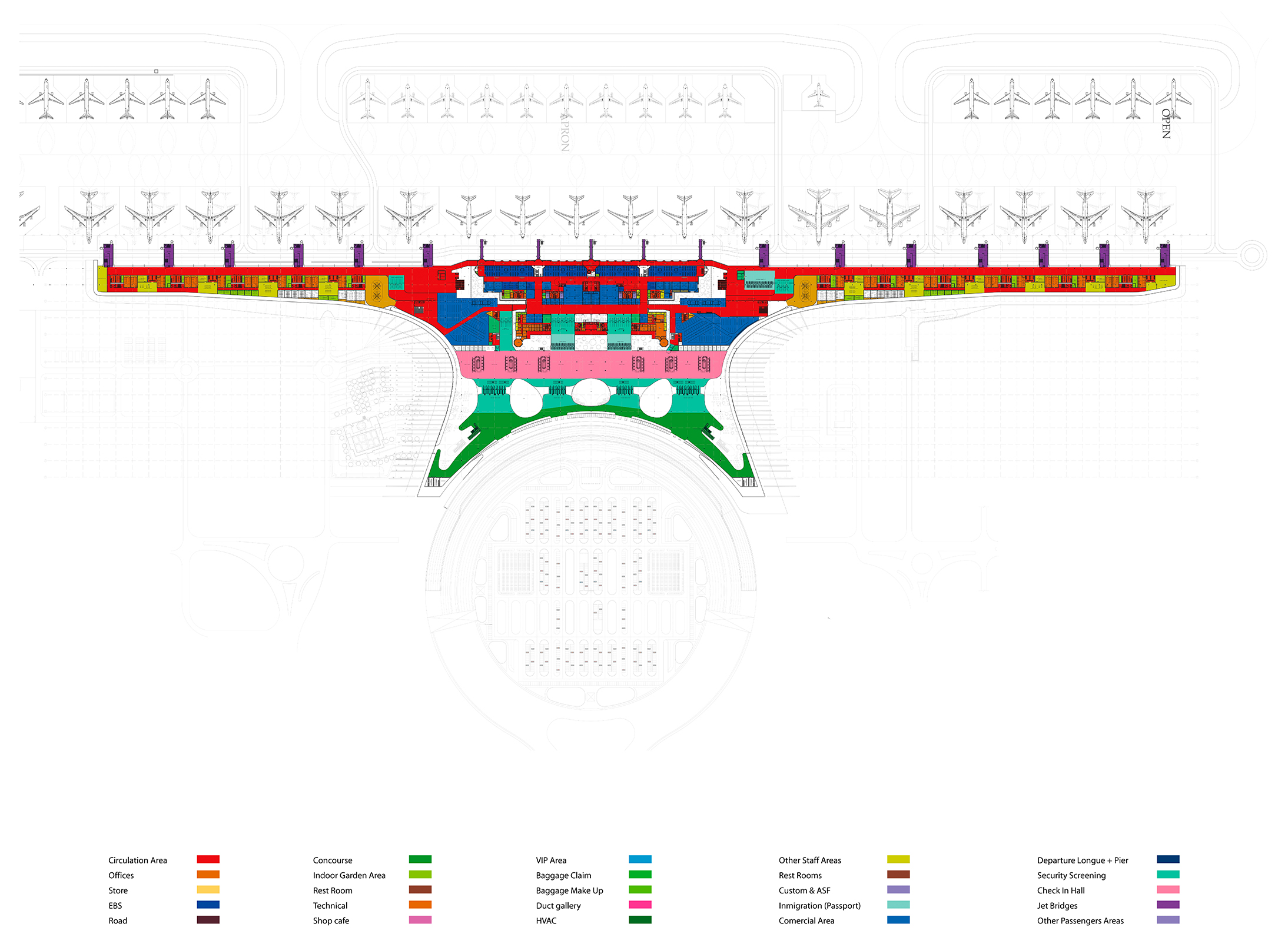 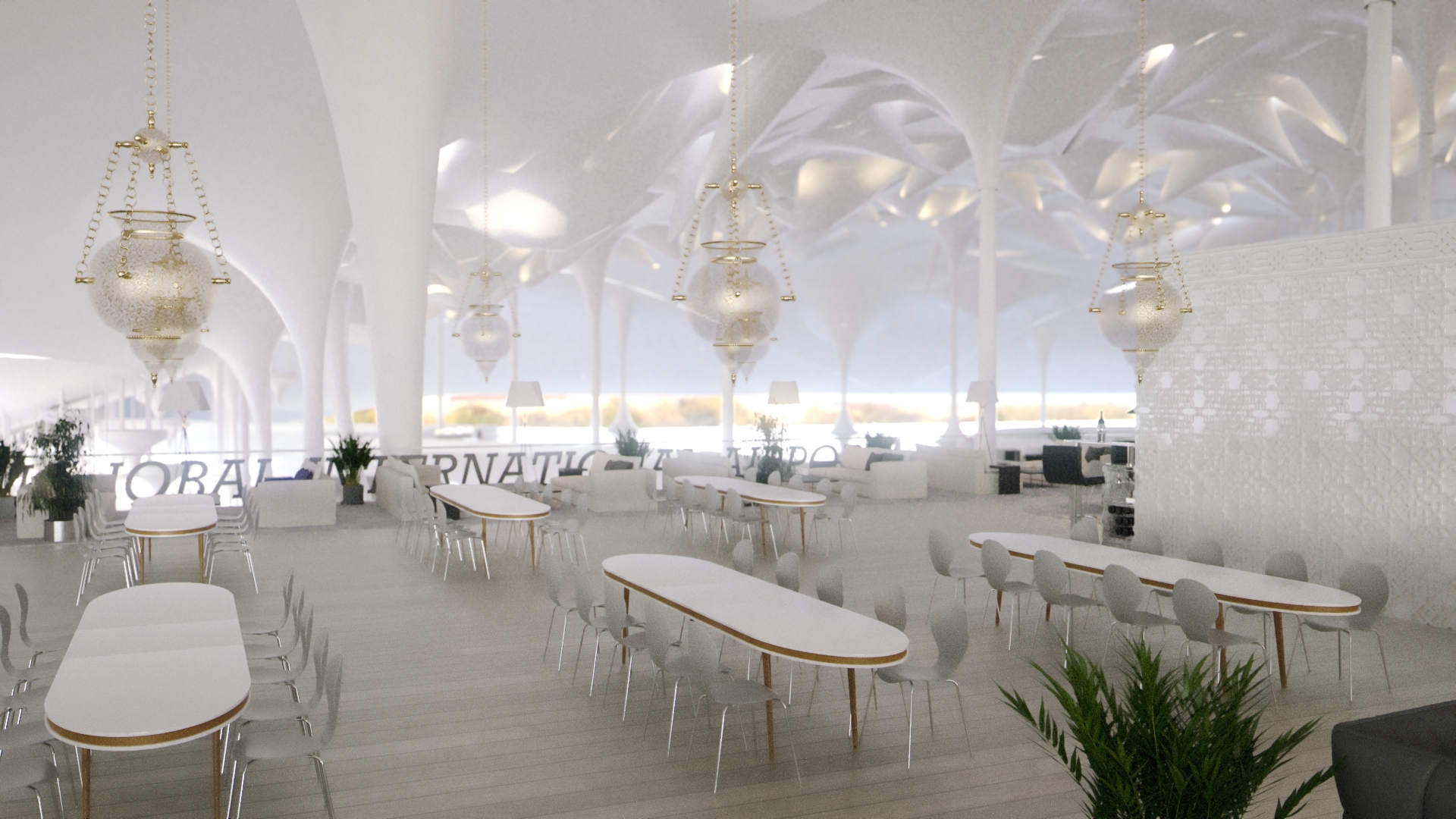 The incorporation of gardens within the terminal reflects on the rich natural and cultural heritage of Pakistan. It also helps to enhance the well being of passengers and companions. . The importance of the connection between humans and the natural environment is recognized by evidence from the fields of psychology and neuroscience and by theories of designers that have discussed and experimented with this issue. The term biophilia has been coined to describe this relationship (Wilson, 1984[1], Storey and Pedersen Zari[2], 2006) and the evidence of the benefits of biophilic design has been linked to our hardwiring to the natural world as a consequence of the evolution of our brain in relation to organisms and materials that configure our perceptive scenario –and that are needed for our well being. There is evidence that people feel less stressed, they are able to concentrate better and even heal physically and psychologically faster when connected to elements of the natural world. (Ulrich[3], 1984, Lohr[4], 1996, Faber Taylor[5], 2002)

Together with this it is important to note that the benefit of using plants in interiors is not only the greenery, but their smell, their contribution to the air quality and the moisture that is provided when they are irrigated. They also communicate a sense of luxury, represent the closeness of nature and as they have to be properly maintained, a sense that the users are being taken care of.

We have envisaged various gardens throughout the terminal:

-a garden in the patio, with dense green plants with flowers and large palm trees.

-lateral gardens in the concourse, linked to the various commercial units, restaurants and coffee shops of the Concourse Hall, with dense green plants with flowers and large palm trees.

-a hanging garden, lit from above through special skylights, to be positioned above the lateral gardens of the Concourse Hall of flower pots and green plats.

-a large central garden, coinciding with the exit of the subterranean connection between the parking and the Concourse Hall, with dense green plants with flowers and large palm trees.

-a landscaped open garden in the surroundings of the mosque, including seating areas, ponds and water channels with grass, shrubs and fruit trees.

-VIP area
This area is designed for businessmen and local authorities. It is placed on an exclusive area with a separate entrance to Airside half way on the left wing of boarding gates. This areas has an exclusive lounge, meeting areas, private rooms, and a small restaurant with its own kitchen. It has a direct access to exclusive vehicles that take the passengers to the airplanes.